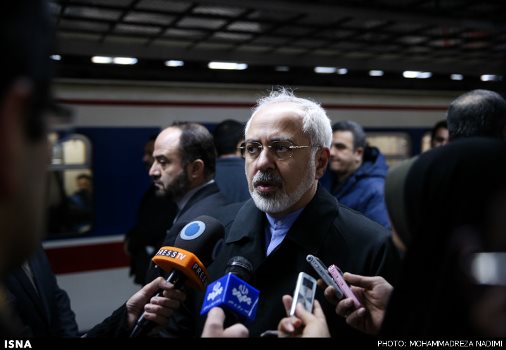 Zarif likely to meet with G5+1 representatives in Davos, Munich

“I will be in Davos for the World Economic Forum meeting along with Mr. Kerry and some G5+1 this week. Off course the planning is not definite, but we can have short discussions and not a long one in Davos,” he said.

He also said most G5+1 foreign ministers are to take part in Munich Security Conference, adding it is possible that Iran and the six countries hold one round of talks in Munich.

Zarif further added that he would meet with the EU Foreign Policy Chief Federica Mogherini in Davos.

Political directors of Iran and the P5+1 states wrapped up their talks on Tehran’s nuclear program in Geneva, Switzerland on Sunday, as the two sides are making intensive efforts to narrow their differences and ink a comprehensive deal.

Following five days of closed-door negotiations in Geneva, Tehran and the six states – Russia, China, France, Britain, the US, and Germany — agreed to resume their discussions on Iran’s nuclear energy program next month.

The two sides are yet to decide the date and location of their next round of discussions.

Tehran and the six countries now seek to reach a high-level political agreement by March 1 and then confirm the full technical details of the agreement by July 1.