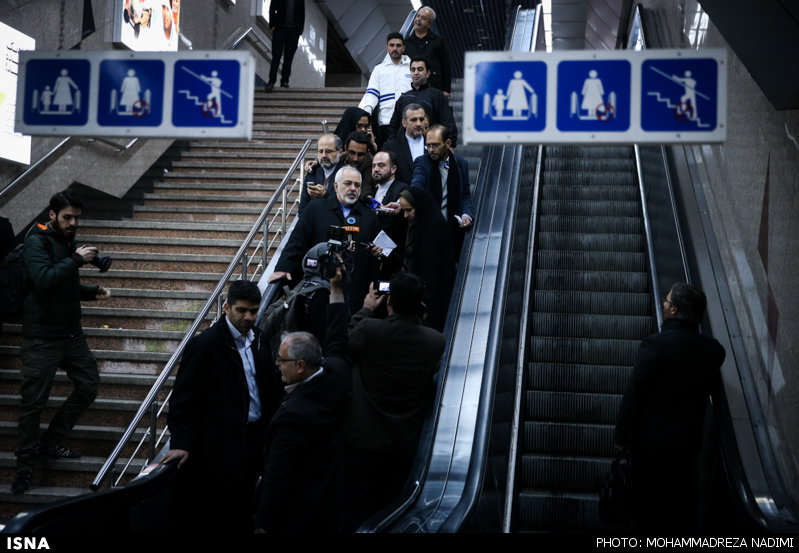 TEHRAN (FNA)- Iranian Foreign Minister Mohammad Javad Zarif called on the US officials to stop the policy of pressures against Tehran, adding that the negotiations with the world powers have entered a complicated stage.

“If the Americans want to reach results, they should put an immediate end to the dangerous game of pressuring Iran,” Zarif told reporters in Tehran on Monday.

Elaborating on the latest round of talks between Tehran and the Group 5+1 (the US, Russia, China, Britain and France plus Germany) which was held in Geneva on Sunday, he said, “The negotiations have become very complicated and we are studying the details. Positions on general points are clear; we have been studying the details for a long time.”

“As I have repeatedly stated, the principle of enrichment, the necessity for removing the sanctions and preserving Iran’s nuclear program have all been accepted and we have been negotiating on details for several months now,” Zarif said.

Noting that the Chinese and French came to the nuclear talks with good proposals, specially on the nuclear fusion, he said, the Iranian team of negotiators will probably hold meetings with their G5+1 counterparts in Davos and Munich on the sidelines of two upcoming international conferences.

“There might be another round of negotiations between Iran and the G5+1 in Munich,” Zarif continued.

Asked if the Iranian side is ready to reach a comprehensive agreement with the world powers by mid March which marks the new Iranian year, he said, “We believe that if the other side shows determination and good will, one week will be enough for reaching an agreement” and the Iranian side is ready for a final deal by the anniversary of the victory of the Islamic Revolution in Iran on February 11.

In relevant remarks on Wednesday, Zarif cautioned the G5+1 not to miss the present opportunity for cutting a final deal with Iran.

Speaking in a televised interview in Geneva, Zarif advised nuclear negotiators to use opportunity for resolution of the deadlock over Iran’s nuclear program.

Upon arrival in Geneva, Zarif called on his western counterparts in the nuclear talks to show courage and avoid drawing baseless redlines to make a landmark nuclear deal possible.

“Now we have come to a stage that requires the other side to take its decision in order to enable use to move forward,” Zarif said upon arrival in Geneva where he later met his US counterpart John Kerry on the latest developments in talks between Tehran and the G5+1.

“There need to be some new and comprehensive proposals, and we are ready to bring all issues to final results, but we should see the extent of the readiness of the other side,” he added.