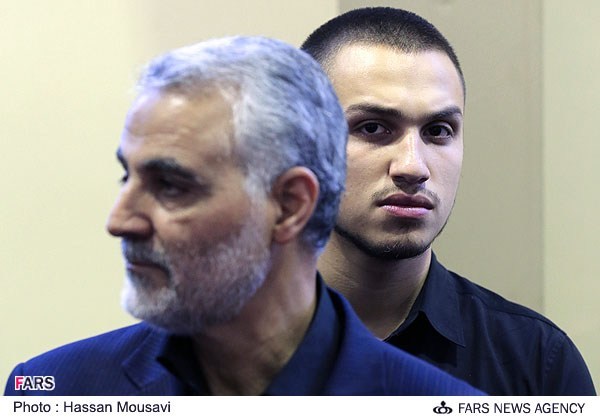 (Reuters) – Hezbollah supporters turned out in force on Monday to bury the son of the group’s late commander, one of six fighters who died in an Israeli air strike in neighboring Syria that also killed an Iranian general.

The killings raised the possibility of a retaliatory attack, with a senior Iranian official suggesting that Israel would be hit at “the right time and right place”. An Israeli defense official said escalation was possible.

Jihad Mughniyeh was buried in Beirut alongside his father Imad Mughniyeh, who was assassinated in Damascus in 2008.

Though it was unclear what role Mughniyeh, who was in his mid-20s, played in Hezbollah, his death represented a symbolic blow to the Shi’ite Islamist group that his father helped to found with Iranian backing in the early 1980s.

It was the biggest Hezbollah funeral since Imad Mughniyeh’s own burial, underscoring Jihad’s significance to the movement.

Thousands of mourners chanted “Death to Israel” and “Death to America” as Mughniyeh’s coffin, draped in Hezbollah’s yellow flag, was carried through the streets of Beirut’s southern suburbs, an area controlled by the group.

A senior Hezbollah commander, Mohamad Issa, was also killed in Sunday’s helicopter strike in the Syrian province of Quneitra near the boundary with the Israeli-occupied Golan Heights.

Israel has not officially commented on the hit, but an Israeli security source confirmed to Reuters that Israeli had carried it out. An Israeli defense official said escalation was “definitely possible… We’re bracing for that possibility.”

However, full-on war was unlikely.

“Scenarios could be a smaller-scale attack from the Golan, or from Lebanon, or on Israeli or Jewish targets abroad,” said the official, speaking to Reuters in Jerusalem on condition of anonymity because Israel is not acknowledging the strike.

Security sources say Israel has struck Syria several times since the start of the civil war in 2011, destroying weaponry it believed was destined for Hezbollah. However, Sunday’s hit was thought to be the first such strike directly targeting fighters.

Israel and Hezbollah have avoided large scale confrontation since a month-long war in 2006. Hezbollah’s leader, Sayyid Hassan Nasrallah, has made repeated threats against Israel since then, part of what is seen as a calibrated policy of deterrence.

Nasrallah last week said Syria’s allies, Hezbollah included, had the right to retaliate for Israeli air strikes in Syria, where Hezbollah fighters have deployed to support the Syrian government in the civil war.

“Iran strongly condemns the Zionist regime’s (Israel) acts of terrorism against the people of Lebanon and the resistance movement,” Iranian Foreign Minister Mohammad Javad Zarif was quoted as saying by Students News Agency ISNA on Monday.

Lebanese sources close to Hezbollah said the slain Iranian general was an important figure in Iran’s operations in Syria.

Admiral Ali Shamakhani, a senior security aide to supreme leader Ayatollah Ali Khamenei, said: “Past experience shows that resistance forces will respond to terrorists acts by the Zionist regime with revolutionary resolve and ferocity in the right time and right place.”