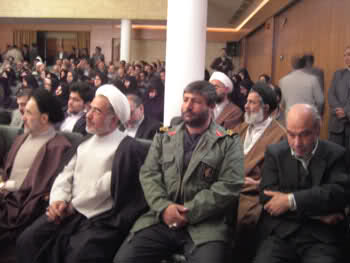 TEHRAN, Iran (AP) — Tehran has confirmed that an Iranian general was among the seven killed in what the Lebanese militant Hezbollah group has described as an Israeli airstrike in Syria.

The confirmation came in a statement published on Monday on the website of the Iranian Revolutionary Guard.

It says Iranian Gen. Mohammad Ali Allahdadi was killed in Sunday’s strike in the Golan Heights, which also killed six Hezbollah fighters – including the son of a top Hezbollah operative assassinated in 2008 in Damascus.

The statement says Gen. Allahdadi was on assignment in Syria, giving “crucial advice” to Syrians fighting terrorists, a reference to Sunni rebels and Islamic extremists.

It says Allahdadi will be buried in the coming days.

The Lebanese militant Hezbollah on Monday prepared to bury six core fighters killed in Syria the day before in what the group described as an Israeli airstrike, including the son of a slain Hezbollah military chief – the group’s most prominent figure to die so far in the conflict next door.

Although Israel did not confirm or deny the strike, it was a serious blow to Hezbollah, stretched thin and neck-deep in Syria’s civil war where the group’s Shiite fighters are battling alongside President Bashar Assad’s forces.

The six fighters were targeted Sunday as they were “inspecting positions” in the Golan Heights area near the Israeli-controlled border, Hezbollah said.

Their deaths could ratchet up tensions between Israel and the powerful Lebanese Shiite movement, which recently boasted of rockets that can hit any part of the Jewish state. But it was also a serious setback for Hezbollah, coming on the heels of a confirmation last week by its leader, Sheikh Hassan Nasrallah, that the organization had uncovered and arrested a senior operative who was spying for Israel.

The burial ceremony for Jihad Mughniyeh – the son of Imad Mughniyeh, a top Hezbollah operative assassinated in 2008 in Damascus, and one of the six killed in the airstrike- was to take place on Monday afternoon in southern Beirut, a Hezbollah stronghold.

Iran’s Foreign Minister Mohammad Javad Zarif, meanwhile, said he “vigorously condemns” the Israeli strike that killed the younger Mughniyeh. Zarif said the strike was no surprise, describing it as “state terrorism” by Israel.

Mughniyeh is the most prominent Hezbollah figure killed in Syria since the Shiite militant group joined the conflict in 2012, fighting alongside Assad’s forces against the Sunni-led rebellion.

The younger Mughniyeh had been photographed with Nasrallah, and with the powerful Iranian Gen. Ghasem Soleimani, highlighting his standing within the group.

Nasrallah in an interview last week also reiterated that Hezabollah reserves the right to retaliate for the assassination of Imad Mughniyeh, which Hezbollah says was carried out by Israel’s Mossad.

Also among those killed in Sunday’s attack was Mohammad Issa, the only one of the six identified by the Hezbollah statement as a commander. He joined Hezbollah at the age of 15 and was among senior cadres who headed the group’s operations in Syria.

Another is Abbas Hijazi, whose father Kamal was one of Hezbollah’s founders. Hijazi took part in most of Hezbollah’s battles against Israel as well as inside Syria over the past decade.