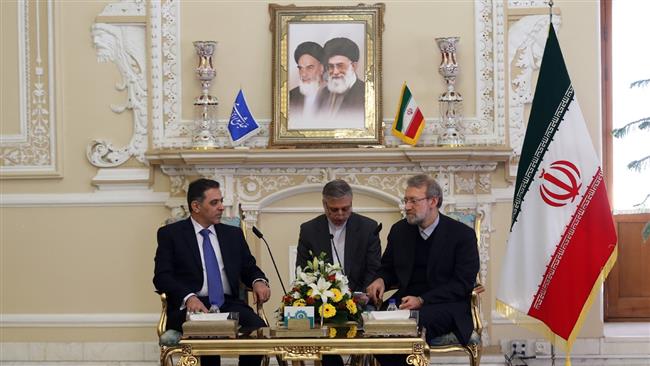 Iran’s Parliament (Majlis) Speaker Ali Larijani has warned against some countries’ move to disintegrate Iraq, stressing that Baghdad must safeguard its territorial integrity.

“Maintaining and strengthening solidarity and territorial integrity of Iraq as an important Muslim country in the Muslim world is a strategic issue for the Islamic Republic of Iran,” Larijani said in a meeting with Iraqi Interior Minister Mohammed Salem al-Ghabban in Tehran on Monday.

He stressed the importance of strengthening national convergence in Iraq and forming public forces along with the army as the only ways to fight the ISIL terrorist group.

He said occupation and reconstruction of Iraq’s industrial infrastructures play a very important role in the war-stricken country’s development and reinforcement of its security and peace.

The interior minister, for his part, hailed Iran’s support for the Iraqi government and nation over the recent years.

ISIL started its campaign of terror in Iraq in early June 2014. The heavily-armed militants took control of Mosul before sweeping through parts of the country’s Sunni Arab heartland.

Iraqi soldiers, police units, Kurdish forces, Shia volunteers and Sunni tribesmen have recently succeeded in driving ISIL out of some areas in Iraq.