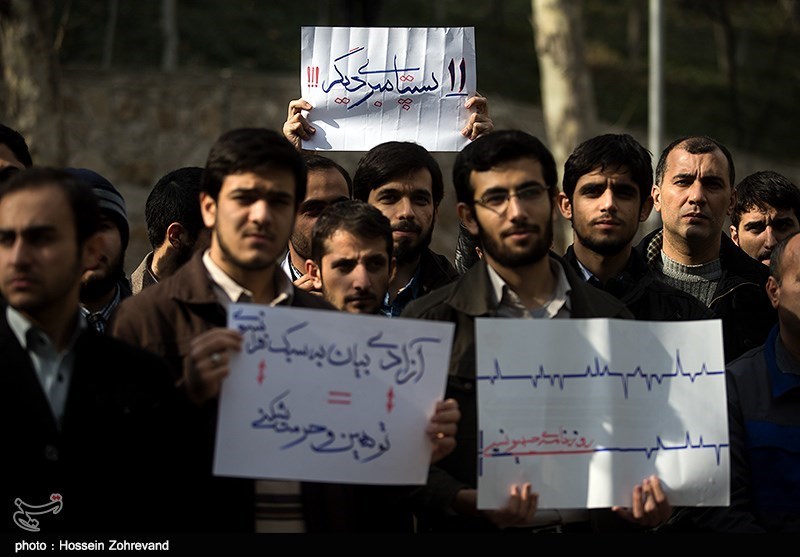 Iran students to protest at French embassy against Charlie Hebdo

Iranian students plan to protest outside the French embassy in Tehran today against the new Charlie Hebdo cover lampooning the Prophet Muhammad.

The Basij students association, which has organized the rally, will “protest insults to Islamic sanctity by the insolent Charlie Hebdo and the unwise actions of officials of that country in support of the offenders,” Naser Arasteh, one of the group’s leaders, was quoted as saying by the Iranian Students News Agency.

The French ambassador, in an e-mailed statement yesterday, said the embassy would be closed to the public and advised French citizens to stay clear of the area.

Islamist gunmen shot dead 12 people at the satire magazine’s Paris office on Jan. 7, sparking a debate about the balance between freedom of speech and respect for religion. The magazine’s post-attack cover, which went on sale last week, depicts Muhammad crying, holding a sign saying “Je suis Charlie” or “I am Charlie.” Above his image is written “All is Forgiven.”

Some editors at other publications have declined to reprint the cartoon on the ground it’s considered offensive to Muslims. The last edition has triggered protests in predominantly Muslim nations including Pakistan and Sudan, led to riots in Niger that left at least 10 people dead, and has been criticized by the head of the Catholic church, Pope Francis.

In Iran, judiciary authorities shut the Mardom-e Emrooz newspaper after it published on its front page a picture of U.S. actor George Clooney with the headline, “I am Charlie,” a reference to the actor’s declaration at the Golden Globes awards ceremony last week. Iranian officials have denounced the assault on the magazine’s office while describing the cartoon on Charlie Hebdo’s cover as “provocative.”