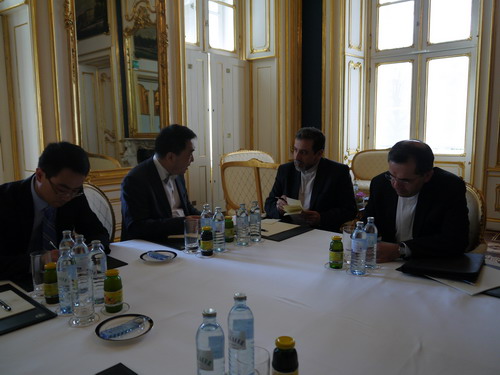 TEHRAN (Tasnim) – Iranian and Chinese top nuclear negotiators held talks in the Swiss city of Geneva on Sunday as part of ongoing negotiations between Iran and the Group 5+1 (Russia, China, the US, Britain, France and Germany) on Tehran’s peaceful nuclear program.

Prior to this meeting, the Iranian diplomats had held a meeting with representatives of all G5+1 (also known as P5+1 or E3+3) countries.

They are also due to hold quadrilateral talks with diplomats from the three European members of the Group 5+1, namely Britain, Germany and France.

Iran and the sextet seek to reach a framework agreement in March and a final long-term deal by June 30.

In November 2013, the two sides signed an interim deal -the Joint Plan of Action- that took effect on January 20, 2014 and expired six months later. They later extended the deal until November 24, 2014.

After failing to hammer out a lasting accord by the self-imposed November 24 deadline, the parties once again decided to extend the deadline for more seven months.

Today’s meetings in Geneva end the latest round of diplomatic negotiations on Tehran’s nuclear case that began in the Swiss city on Wednesday with bilateral meetings between Iranian Foreign Minister Mohammad Javad Zarif and US Secretary of State John Kerry.

The two top diplomats held four rounds of talks over the past four days. On Friday and in his trip to Paris, Zarif met with his French counterpart Laurent Fabius.