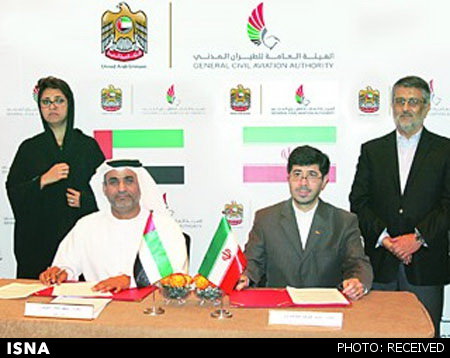 TEHRAN (ISNA)- Iran and the UAE signed a Memorandum of Understanding (MoU) in a bid to boost bilateral air transport cooperation.

The two sides stressed the further expansion of bilateral ties in all fields.

Based on the deal, Iran and the UAE agreed to raise the number of flights, establish flight lines between Dubai and other Iranian cities, secure the flights between the two countries, establish a system for cooperation in the fields of aviation safety, search and rescue activities and air accidents.

During the meeting, Jahangirian said that talks with the UAE would represent a new starting point to strengthen and expand cooperation between the two countries.

Al-Suwaidi, for his part, said, “The historical, economic and religious ties between UAE and Iran play a vital role in our bilateral relations in all fields, including aviation. The strategy of the GCAA supports open skies agreements that benefit all parties in the air transport industry. It is in our interest to develop air transport relations with Iran, leading to full open skies relation between the countries in the near future.”