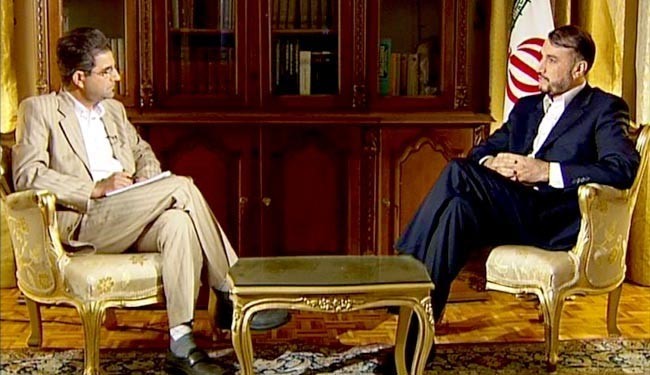 Hossein Amir-Abdollahian who was speaking to Al-Alam TV network program, responded to questions by the anchor about the latest developments in the region.

In response to a question about the clash of positions taken by Iran and Saudi Arabia on issues of Syria, Iraq and Lebanon, Amir-Abdollahian told the program that there had been some sort of progress in diplomatic relations with Saudi Arabia; “however, Saudi Arabian conduct in specific issues conflicted with the positions taken by the Islamic Republic of Iran, a conduct which we believe only confound the already volatile situation in the region; we believe Saudi Arabia should review its conducts to bring unity to the region,” he added.

“Despite the clashes, Iran’s Mohammad Javad Zarif and Saudi Arabia’s al-Faisal met in New York which widely interpreted as a step forward and positive,” Amir-Abdollahian asserted, “the meeting along with my visit to Jeddah, which brought the countries in the region constructive consequences, we received an invitation by al-Faisal for Mohammad Javad Zarif for a visit to the Kingdom to discuss regional and international issues,” he said.

Amir-Abdollahian however told the program in Al-Alam TV network that the visit was effectively postponed by ‘unexpected and improper’ remarks by Saud al-Faisal himself in the Saudi media “after plans had been made to the visit.”

“The visit was planned to take place two or three weeks after Eid al-Adha in Riyadh; however, al-Faisal’s unacceptable remarks on Syria put us in hot water at home; Saudi FM would always emphasize on a meeting with Zarif, and we will work to arrange the meeting in nearest possible time,” deputy-FM told the program.

Amir-Abdollahian also pointed to the US sending messages to the Islamic Republic of Iran ‘under the pretext of fighting ISIL and solving Syrian crisis.’

He also added to his former remarks earlier in the program that plunging oil prices was another postponing cause of the meeting of the FMs; “the oil producing countries in the region would expect to see that Saudi Arabia acts in order to reduce damage on their economy by cuts in oil prices, preventing any further plummets in oil prices,” Amir-Abdollahian said.

“We called Saudi government through diplomatic means to take wise measures in the face of any plots by the common enemies to inflict damage on the regional economy; we informed them, in the OPEC meetings, of our clear positions that Saudi Arabia should play a role which would help the interests of the region,” he told Al-Alam TV network program.