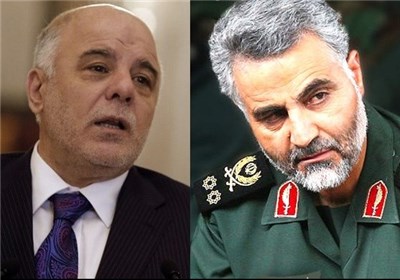 During the meeting held in in Iraq, the two sides discussed Iran’s military support for the Iraqi government in its fight against terrorism as well as future plans for training volunteer forces in the Arab country, former Iraqi MP Kamal al-Saedi said.

The Iraqi premier, in the meeting, criticized Washington’s delayed military assistance to Baghdad, arguing that the US military lacked a clear strategy after its withdrawal from the country.

Iraq has been facing the growing threat of terrorism, mainly posed by the ISIL Takfiri militants.

The ISIL terrorists made swift advances in much of northern and western Iraq over the summer, after capturing large swaths of northern Syria.

However, a combination of concentrated attacks by the Iraqi military and the volunteer forces, who rushed to take arms after top Iraqi cleric Ayatollah Ali al-Sistani issued a fatwa calling for fight against the militants, have blunted the edge of the ISIL offensive.