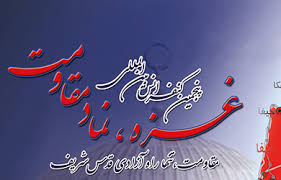 According to the conference Secretary Hossein Rouyvaran, the fifth edition of the International conference of ‘Gaza, Symbol of Resistance’ will kick off tomorrow at 14:00 to 17:00 local time with an opening speech by Iran’s Parliament speaker Ali Larijani.

While maintaining that the conference had been passed as an act of the Iranian Parliament, Rouyvaran added that Representative of the Palestinian Islamic Jihad Movement, Naser Abu Sharif along with two other lecturers from Iraq and Canada will attend the event.

The conference is chaired by the Secretary General of Iran-based Society in Defense of the Palestinian Nation (SDPN), Zahra Mostafavi.

“100 articles have been submitted to the secretariat of the conference, 5 of which will be selected to receive the top prize tomorrow,” said Rouyvaran, noting that foreign ambassadress to Iran have also been invited to take part in the conference.

The conference aims to commemorate the resistance shown by Palestinians especially the people of Gaza during Israeli aggressions against the Gaza Strip, as well as debate the threats and assets of the regional resistance under the current regional developments.

January 19 has been designated by the Iranian parliament as day of Gaza in the Iranian calendar.