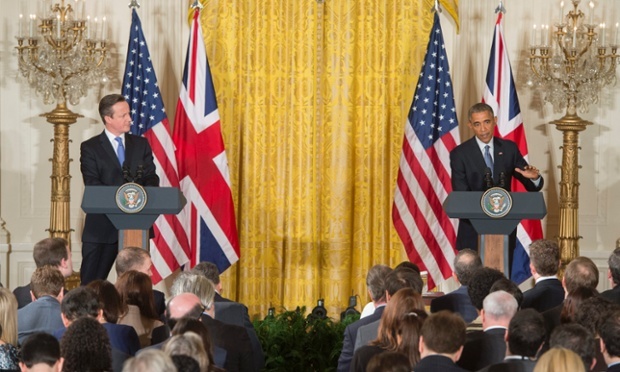 Sanctions legislation from the U.S. Congress would be counterproductive and “put at risk the valuable international unity that has been so crucial,” Cameron said in a news conference at the White House Friday with Obama. The president said his approach of providing limited sanctions relief has rallied other nations and resulted in serious talks that have halted any advance in Iran’s nuclear program.

“I am asking Congress to hold off because our negotiators, our partners, those who are most intimately involved in this assess that it would jeopardize” the talks, Obama said. “My main message to Congress is just hold your fire.”

“My main message to Congress is just hold your fire.”
President Barack Obama

He said he would veto any Iran sanctions legislation.

Pressure has been growing from members of both parties in Congress to step up penalties on Iran, with some members arguing that the relief granted during international negotiations has enhanced the Islamic Republic’s diplomatic stature. One of those lawmakers, Democratic Senator Bob Casey, said this week he expects there will be a vote on sanctions before the July deadline for the nuclear talks.

One proposal, from Senators Mark Kirk, an Illinois Republican, and Robert Menendez, a New Jersey Democrat, would impose sanctions beginning June 30 if Iran fails to agree to a deal. Passage in the Senate would require support from at least six Democrats, many of whom have been hesitant to act before talks are completed.

The Senate banking committee has scheduled a hearing on the “strategic necessity of Iran sanctions” for Jan. 20.

Brian Rogers, a McCain spokesman, declined to comment on any appeal from Cameron or on Obama’s request that Congress hold off on new sanctions.

Corker said in a statement that his “good conversation” with Cameron didn’t change his position on the issue.

“There is no doubt that it is the leverage provided by Congress that forced Tehran to the negotiating table, and I continue to believe that Congress weighing in on this critical issue can help these negotiations succeed, not undermine them,” he said.

House Speaker John Boehner, an Ohio Republican, called Iran “a state sponsor of terror with an abysmal human rights record” and said, “No White House threat will stop us from doing the right thing to protect the United States and its allies.”

The collapse of talks between Iran and six world powers could increase the risk of a military conflict while setting off an arms race in the Middle East, Obama said.

“We have to recognize the possibility that should diplomacy fail, we have to look at other options to achieve that goal,” Obama said.

The two leaders said that if the current round of negotiations fails — Obama put the odds at 50-50 — then new sanctions could then be imposed. A separate action by the U.S. would undercut support from other nations, including some allies, that do business with Iran, Obama said.

The U.S. president said he could ask Congress to impose tougher sanctions if the negotiations fail after running their course. “That’s not a hard vote for me to get,” he said.

Iran Foreign Minister Mohammad Javad Zarif met Friday in Paris with U.S. Secretary of State John Kerry and his French counterpart Laurent Fabius. World powers and Iran convene on Jan. 18 in Geneva for negotiations. Diplomats have until March 1 to create a political framework and July 1 to resolve details for an accord to end the 12-year-old stalemate that has raised the prospect of military conflict Iran.

The meeting with Zarif was Kerry’s second in three days. On Wednesday in Geneva the diplomats had substantial talks that touched on a broad number of issues, according to a State Department official who asked not to be identified in line with diplomatic rules.

U.S. and Iranian diplomats continued negotiating on Friday in Geneva. Officials from the China, France, Germany, Russia and the U.K. will join them next week.

Iran initially was given limited relief from the U.S. sanctions from Jan. 20 to July 20, 2014, and it was extended until this July as negotiations over its nuclear program continued. U.S. and European sanctions have curbed foreign investment and hindered exports of the Persian Gulf state’s oil, its most important source of revenue.

The existing sanctions regime has already hobbled Iran’s economy and cut its crude output to the lowest since 1990. The collapse of oil prices to near 5 1/2-year lows has added bite. Iran’s oil revenue has declined by $100 billion over the past three years, according to Mohsen Rezai, secretary of the nation’s Expediency Council, a supervisory body.