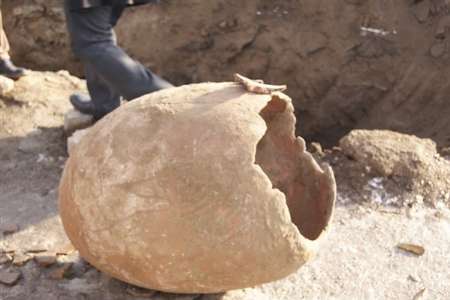 Head of the Cultural Heritage, Handicrafts and Tourism Department of Makou told IRNA that two ancient clay crocks belonging to the first millennium B.C. (3500 years ago) have been unearthed during excavations for water supply to the border post in Qarqoloq village in Poldasht.

Abdollahpour said the two small and large crocks have been put at the disposal of the Department for further study and careful examination on historical objects.

The official further remarked that the dimension of the larger crock is 70 to 90 cm and with the stones discovered from within it has been found out that it was used for burying the dead bodies.

The head of the department noted that in ancient Persia to bury the dead in crocks was among several burial processions and discovery of the crocks in the region is indicative of the habitation of human groups in the region.

Poldasht is one of the northern cities of West Azarbaijan Province with over 40 thousand population which has joint border with the Autonomous Nakhichevan Republic.

No information is yet available on the habitation of man in the region.