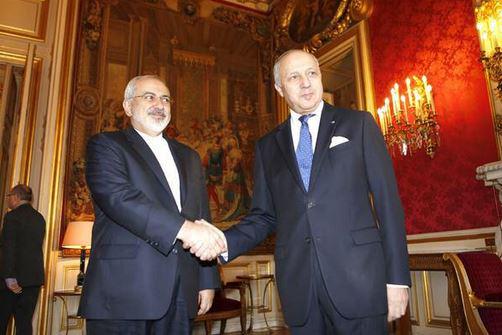 Zarif and Fabius discussed the latest developments in Iran-EU relations and the ways ahead for strengthening these relations.

They underlined the need for final settlements of the nuclear dispute between Iran and the world powers.

Zarif, who is on a tour to Europe for talks with his counterparts over Tehran’s nuclear program, held seven hours of talks with US Secretary of State John Kerry in Geneva on Wednesday. He then left Geneva for Berlin, where he met his German counterpart Frank-Walter Steinmeier.

Zarif and Steinmeier underlined that Iran and the six world powers have to clinch a comprehensive deal at the earliest to put an end to years of dispute over Tehran’s nuclear program.

In a press conference, Steinmeier said that nuclear talks with Iran have reached a decisive point, urging both sides to seize the chance for clinching a deal.

According to the European Union External Action website, during their meeting, Ms. Mogherini said: ‘We affirmed our strong commitment to a diplomatic solution which would fully address international concerns about the exclusively peaceful nature of the Iranian nuclear issue. Negotiations have to be brought to a conclusion in line with the agreed time.’

The EU foreign policy chief and the Iranian foreign minister also discussed a wide range of topics, from human rights to the major regional crises in the Middle East, such as what’s going on in Syria, Iraq, Afghanistan and the common threat posed by Daesh terrorist group.

They talked about regional dynamics. Mogherini emphasized that ‘the relationship between Iran and other countries of the region is crucial for regional stability.

The EU feels the current security situation in the region has created an urgent need for regional powers to consult and cooperate, defuse sectarian tensions and address the root causes of the rise of Daesh and the crises in Syria and Iraq’.