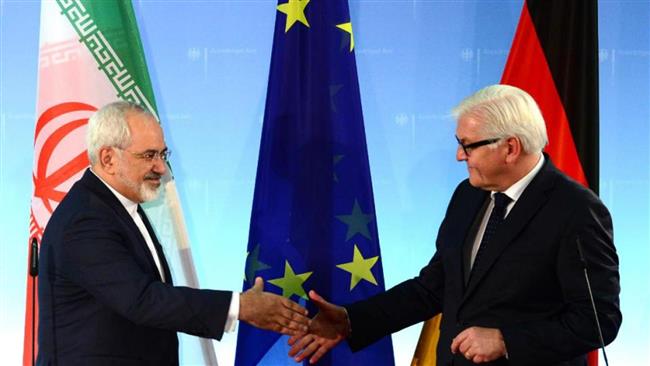 Iran’s Foreign Minister Mohammad Javad Zarif says the world is in dire need of dialog to counter sweeping waves of extremism and terrorism.

“Today’s world is in need of dialog and interaction more than ever,” Zarif said in a meeting with Germany’s Foreign Minister Frank-Walter Steinmeier in Berlin on Thursday.

“Today, the menace of impatience and disregard for others’ values is spreading the seeds of discord and animosity” among nations, the Iranian top diplomat said, adding that the growing wave of violence in the world should be curbed through respecting different viewpoints and with the assistance of dialog and interaction.

Commenting on the crisis in Syria, the Iranian foreign minister said the ongoing war, bloodshed, terrorism and extremism in the country can be prevented via dialog.

He also said that dialog can play an instrumentally facilitative role to help the Iraqi government to fight against terrorism.

The ISIL Takfiri terrorists control parts of Syria and Iraq, and have been carrying out horrific acts of violence such as public decapitations and crucifixions against all communities such as Shias, Sunnis, Kurds, and Christians.

Zarif also touched upon the ongoing nuclear talks between Iran and the five permanent members of the UN Security Council – the United States, France, Britain, Russia and China- plus Germany.

He said Germany as a member of the P5+1 group has played an “active” role in the negotiations, adding that Berlin can play a more effective role in the process.

The German foreign minister, for his part, said the nuclear talks have entered “a decisive phase,” adding, “We must now use the newly opened time window, we must leave nothing undone to reach the solution that has eluded us in recent years.”

Iran and the P5+1 group wrapped up their latest round of nuclear talks in Geneva on December 17, 2014, three weeks after they failed to reach a final agreement by a November 24 deadline despite making some progress.

The two sides agreed to extend their discussions until July 1, 2015. They also agreed that the interim deal they had signed in Geneva in November 2013 should remain in place during the negotiations.

A fresh round of nuclear talks between Iran and the P5+1 group of world powers will kick off in the Swiss city of Geneva on January 18.

“We have extended this transition agreement twice, but we also agreed at the last meeting that we share the common understanding that one cannot indefinitely continue the extensions,” Steinmeier said.