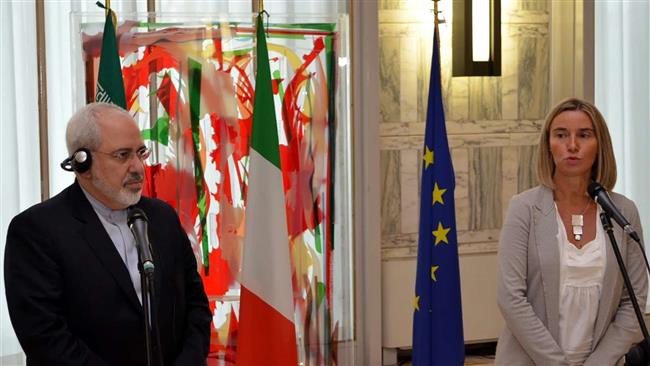 During a meeting in the Belgian capital of Brussels on Thursday, the two underlined that there should be no waste of time in reaching an agreement between Iran and world powers on Tehran’s peaceful nuclear program.

“We affirmed our strong commitment to a diplomatic solution which would fully address international concerns about the exclusively peaceful nature of the Iranian nuclear issue,” Mogherini said in a statement after the meeting.

“Negotiations have to be brought to a conclusion in line with the agreed time,” the statement, published on the European External Action Service (EEAS) website, further said.

Zarif and Mogherini also discussed a range of other issues including human rights, the common threat from the so-called Islamic State in Iraq and the Levant (ISIL) terrorist group, and crises in regional countries like Syria, Iraq, and Afghanistan.

The EU foreign policy official highlighted Iran’s role in the region and encouraged Tehran “to use its considerable influence to help create a more inclusive and stable Iraq, which is in both the EU’s and Iran’s interests, but also to contribute to a political solution to the Syrian crisis by supporting United Nations Special Envoy for the Syria crisis Staffan de Mistura,” according to the EEAS statement.

The latest round of negotiations on Iran’s civilian nuclear program kicked off on Wednesday with a meeting between Zairf and US Secretary of State John Kerry.

The Iranian top diplomat on Thursday met with his German counterpart in Berlin and is due to hold talks with France’s foreign minister on Friday.

On Sunday, January 18, representatives from Iran and the Group 5+1 (France, Britain, the United States, Russia, China, and Germany) will have a plenary meeting in the Swiss city of Geneva.

The two sides wrapped up their latest round of nuclear talks in the Swiss city on December 17, 2014, three weeks after they failed to reach a final agreement by a November 24 deadline despite making some progress.

They agreed to extend their discussions until July 1, 2015.