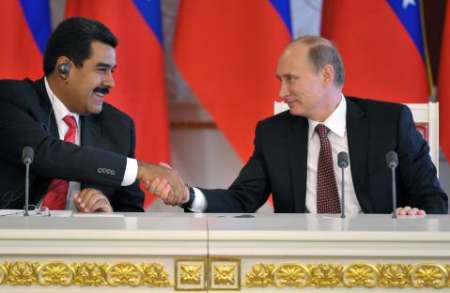 Tehran, Jan 15, IRNA – Russian President Vladimir Putin will meet, Thursday, with his Venezuelan counterpart Nicolas Maduro, who will arrive in Russia on a working visit, the Kremlin press service said.

Putin and Maduro are expected to discuss key issues of bilateral cooperation, including implementation of major joint projects.

Russian presidential spokesman Dmitry Peskov told TASS: “Of course, the situation on world oil markets will be among the topics.”

Last week, Maduro made a series of visits to several OPEC member-countries, as well as to China, for talks with their leaders. Maduro said the major goal of his contacts was “to continue the high-level efforts aimed at restoring world oil prices”.

On the way to China on January 5 the Venezuelan president made a stopover at Moscow’s Vnukovo Airport where he had a brief meeting with Russian Deputy Foreign Minister Sergei Ryabkov.

Maduro, who was elected Venezuela’s president in April 2013 after the death of Hugo Chavez, met with Putin several times. The presidents of both countries held talks in Moscow in July 2013 on the sideline of the Gas Exporting Countries Forum summit and within BRICS (Brazil, Russia, India, China and South Africa) summit in July 2014.

Russia and Venezuela develop cooperation in different fields, including in the military-technical sphere and in the fuel-energy sector. The countries maintain relations in industry and in housing construction. Putin named Venezuela as Russia’s reliable partner in Latin America. He said Russia would further cooperate with Venezuela on the international arena.