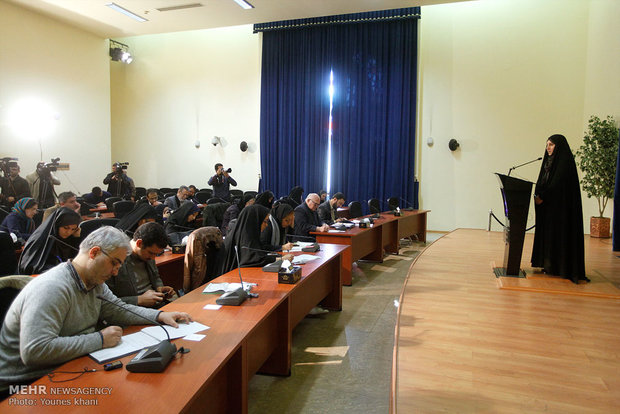 TEHRAN, Jan. 14 (MNA) – Iran’s FM spokeswoman has said the realistic view now seen in the western media regarding Iran’s nuclear program was due to Iran, 5+1 negotiations.

Marizeh Afkham made the remarks at her weekly press conference today in Tehran.

She maintained that any new sanctions at the time the nuclear negotiations were still under way would be counterproductive and mean a halt to the ongoing negotiations. She urged the other side at the negotiation table to approach Iran’s issues ‘realistically’ and stay away from ‘guesswork.’

Afkham asserted that Iran has embarked on the course of negotiations with the six states to prove its nuclear program was completely peaceful and it was not going to make any military use of the program.

“Iran and G5+1 nuclear negotiations have been helpful in bringing about a realistic view in the western media,” she said.

In response to a question about FM Zarif’s call on European states to play a more effective role in talks, Afkham urged all members of the negotiating teams to adopt a balanced approach in following up on negotiations, stressing that all could be effective in their parts and keep the negotiations on the right course until a final deal was struck.

“We are serious and determined to make the best use of this opportunity to reach an agreement,” she said.

In regard to the recent terrorist attack on the French satirical magazine Charlie Hebdo, Afkham called on western countries to stop adopting wrong policies in their ‘counterterrorism’ plans; “we are opposed to insulting sanctities, human values and followers of Divine religions. Insulting them would not help fighting extremism, rather it would just fan the conflicts and bring about a vicious circle.”

Afkham stressed adopting a ‘macro view’ of the issues and a staying away from ‘dual stances.’ “This is the right opportunity for France to start proving their sincerity in fighting terrorism,” she said.

In regard to the hot topic of oil prices, Afkham called on responsible countries to stop using the oil market as a ‘political leverage.’

“If they continue using this economic component politically, they are going to lose,” said Afkham, noting that Iran was reducing its economy’s dependency on oil.

“Iran has started various rounds of negotiations on the current state of oil. Consultations are necessary, in and outside of OPEC, to find ways to stop the politically-motivated use of the oil market,” she said.

Iran’s President Hassan Rouhani had on Tuesday highlighted that Iran’s 33 percent dependency on oil income and had warned that Saudi Arabia and Kuwait would certainly suffer greater losses with 80 percent and 95 percent of their budget revenue coming from oil, respectivley.