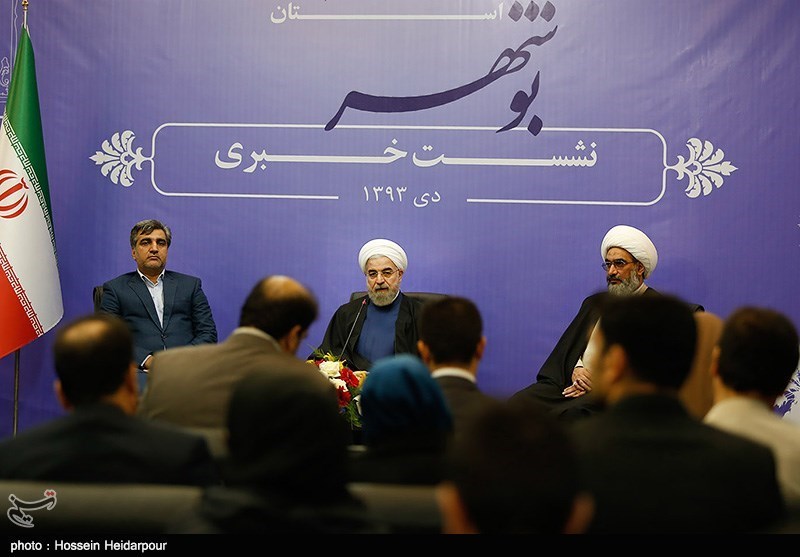 BUSHEHR, Jan. 14 (MNA) – Wrapping up second and last day of his provincial trip to Bushehr Province, President Rouhani held a press conference to answer the questions of reporters in the Province.

Among the top plans ratified during the President’s visit to Bushehr are execution of eleven projects in 2015 and 2016 which are aimed at taking big steps in addressing economic issues in the province with $173 million budget.

Among the projects approved is the construction of a stadium with seating capacity of 15,000 to meet sport needs of Bushehr.

President Rouhani also unveiled another big measure taken by the government to build two more power plants providing 2,000 megawatts of power supply in the country, in addition to providing sweet water for the people of the Province.

Pointing to the high capacity of Bushehr in tourism, Rouhani unveiled projects for building two tourism villages in order to boost tourism industry and attract more investments and money toward the economic stream of the province.

He also pointed out to construction of two dams with purpose of solving water problems and boosting the economy of the province.

Stressing the need for the government to provide infrastructures and foundation for improving and execution of the plans in the province, President Rouhani urged local officials and people of the province to be more active in advancing the projects determined by the government.

Pointing to the concerns expressed by the reporters over the hazards and harms of the nuclear plants for the people nearby, he rejected the claims and said, “the plants are under the supervision of IAEA and international agencies posing no environmental or human threats to the people living nearby.”

President Rouhani concluded by expressing his gratitude for all national and local media outlets and reporters.

Iran’s President Hassan Rouhani heading a delegation of cabinet members went to Iranian southern Province of Bushehr on Tuesday for a 2-day trip to visit the province and present his plans to improve the economic situation in Busher.