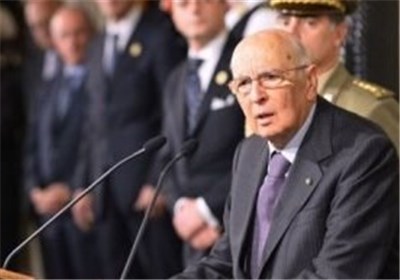 TEHRAN (Tasnim) – Italy’s veteran President Giorgio Napolitano resigned Wednesday, setting the stage for the election of a new head of state, a thorny process which could prove a political headache for Matteo Renzi’s government.

The 89-year old had announced in December that he would be leaving office well before the end of his term in 2020 because of his advancing age.

He had been persuaded in 2013 to stay on for an unprecedented second term after deadlocked elections sparked a political crisis in the eurozone’s third-largest economy — but had always been expected to step down early.

Prime Minister Renzi paid tribute to the president on Tuesday, telling the European Parliament that Napolitano had been a man driven by the desire to reform, who “faced moments of great difficulty with intelligence and wisdom.”

Parliament now has to meet within 15 days along with 58 regional deputies to begin elections to choose a new president.

European Central Bank chief Mario Draghi on Wednesday rejected speculation that he had his eye on the job.

“The election of the President of the Republic, just like the election of the pope, is completely unpredictable, but unlike a conclave (papal election), it doesn’t even have the help of the Holy Spirit,” said Luigi La Spina, editorialist for La Stampa daily.

While the post of president is largely ceremonial, it takes on vital importance during times of political crisis when the president can help steer the formation of a new government.

“Napolitano has been president in one of the most difficult phases in our country, not just politically but economically,” Francesco Clementi, professor of constitutional law at the Luiss University in Rome, told AFP.

“I think the presidential election will certainly be complex… the government will have to work hard” to find a figure who will suit parties from across the political spectrum, he said.

The election does carry political risks for Renzi, whose government was ushered into power last year with Napolitano’s blessing.

The successful candidate must win the votes of two-thirds of lawmakers in both houses of parliament — and Renzi will need to keep the more rebellious wing of his party in line to ensure he gets his man.