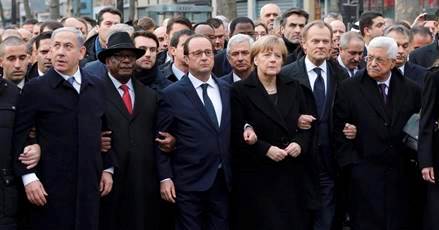 TEHRAN (Tasnim) – The Palestinian Islamic Resistance Movement, Hamas, emphasized that the recent move by Israeli Prime Minister Benjamin Netanyahu to take part in the march against terror in Paris cannot whitewash his crimes against humanity.

In a statement on Wednesday, Hamas Spokesman Sami Abou Zahri condemned Netanyahu’s participation in the highly publicized march in Paris on Sunday and said that the move cannot deceive people and lead to Netanyahu’s acquittal of his crimes during the 51-day war on the Gaza Strip.

A string of terrorist incidents in France took the lives of 17 people in three days of violence which began with an attack on the Charlie Hebdo satirical weekly on Wednesday, January 7, and ended with Friday’s dual hostage-taking at a print works outside Paris and kosher supermarket in the city.

After the incidents, dozens of world leaders participated in a march in Paris under high security to pay tribute to victims of the terrorist attacks.

“Netanyahu will remain as a symbol of terrorism in the world,” the Hamas spokesman underlined.

In a stark reminder of the Tel Aviv regime’s brutalities, over 2,000 Palestinians, most of them civilians including more than 490 children, were killed in the Gaza Strip after Israel launched an offensive on the coastal enclave of 1.8 million population on July 8, 2014.