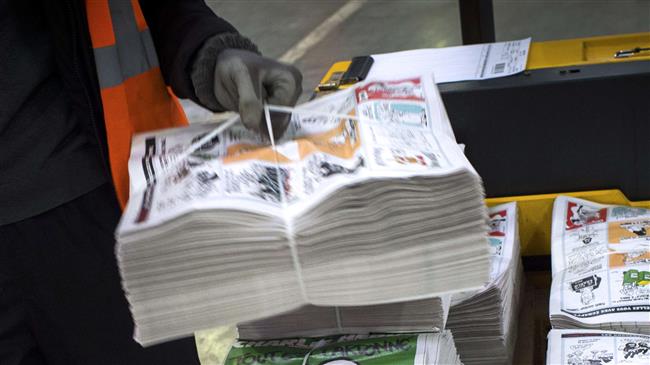 An employee carries copies of the forthcoming edition of Charlie Hebdo, January 13 in Paris.

French magazine Charlie Hebdo has once again published a cartoon depicting Islam’s Prophet Muhammad on the cover of its new edition amid warnings that the move is provocative.

Three million copies of the new edition of the satirical magazine hit newsstands on Wednesday. The magazine routinely sold only 60,000 copies each week before a January 7 attack on its offices in the French capital, Paris, during which 12 of its staff members were killed.

The attack was largely believed to have been launched over the weekly’s previous cartoons of the Prophet.

The latest cover of Charlie Hebdo had been published in advance by media.

The latest cover cartoon was drawn by one of the weekly’s cartoonist who survived last week’s terrorist attack on the magazine’s offices.

The suspects involved in the Charlie Hebdo shooting were reportedly linked to the terrorist al-Qaeda group.

France has deployed thousands of soldiers at various sites across the country – including synagogues, mosques and airports in response to the attacks.

The top Islamic authority in Egypt, Dar al-Ifta, also lashed out at the French satirical magazine over the provocative cartoon in its special edition.

“This action is an unjustified provocation against the feelings of 1.5 billion Muslims,” it said in a statement on Tuesday.

Muslim communities in France have called for calm and restraint.