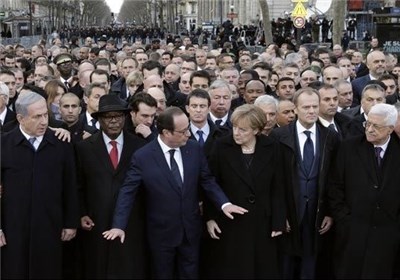 TEHRAN (Tasnim) – The White House acknowledged it should have sent a senior official to the massive rally against terrorism in Paris, as President Barack Obama came under fire for failing to travel to France.

“We should have sent someone with a higher profile to be there,” White House spokesman Josh Earnest said.

Washington was represented at the event by the US ambassador to France, Jane Hartley.

Earnest said Obama would have liked to have gone himself, but suggested that the security requirements and short planning time had prevented it, AFP reported.

“In a situation like this, they have a pretty significant impact on the other citizens who are trying to participate in a large public event like this.”

About 1.5 million people flooded the streets of the French capital Sunday to memorialize the 17 people killed in attacks in and around Paris that began last week with a massacre at satirical weekly Charlie Hebdo and ended with a hostage standoff at a kosher grocery.

French President Francois Hollande was joined at the march by 50 world leaders in a display of unity that made headlines worldwide.

Yet the failure of Obama, his deputy Joe Biden or a senior cabinet official to join the rally angered many US commentators. Many accused Obama of letting down ally France.

Secretary of State John Kerry said he would travel to Paris after wrapping up his tour of South Asia.

Adding to the dismay among some American pundits and lawmakers, US Attorney General Eric Holder had been in Paris for a meeting on terrorism, but even he did not join the rally.