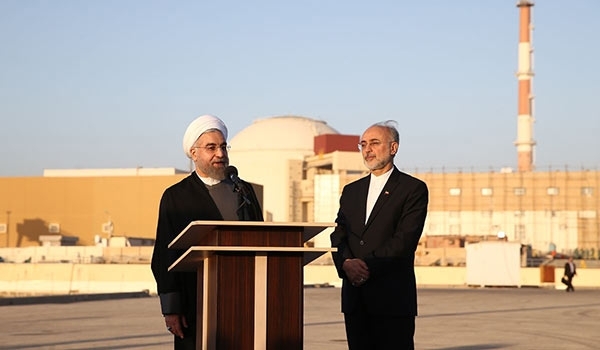 “Construction of two new power plants will increase the capacity of Bushehr province’s power generation to 2,000 megawatts,” President Rouhani said in a meeting with investors and economic activists in Bushehr province today.

Earlier today, President Rouhani underlined during a visit to the Bushehr nuclear power plant that Iran is pursuing nuclear energy for peaceful purposes, and said, “The Bushehr Nuclear Power Plant is an example showing that Iran is only looking for a civilian use of the nuclear energy and for power generation.”

President Rouhani, who is on a provincial tour of the Southern Bushehr province, visited the nuclear power plant this afternoon. During the visit, the president, who is heading a delegation of high-ranking governmental officials during the tour, was briefed on the latest conditions of the power plant and its output.

In October, Head of the Atomic Energy Organization of Iran (AEOI) Ali Akbar Salehi underlined the financial and environmental benefits of Bushehr nuclear power plant for the country, saying that the power plant will save Iran $1bln worth of fossil fuel each year.

“About 7bln kw/h electricity is being generated annually at Bushehr nuclear power plant which saves $1bln worth of fossil fuel which will be followed by the same level of decrease in air pollution,” Salehi said, addressing a meeting with Iranian legislators at the parliament’s Energy Commission.

He also presented a report to the Commission on the AEOI’s formation and the launch of the Bushehr nuclear power plant.

The operator of Bushehr nuclear power plant said in September that the plant is operating at maximum capacity and has generated 7.5bkw/h of power so far.

Speaking during a visit to the plant by Iranian Parliament Speaker Ali Larijani, Mahmoud Jafari said operation of the power plant “saves the country the consumption of 8.5 million barrels of oil annually”.

He further blasted the western animosities towards Iran’s civilian nuclear activities, and said, “Although the Bushehr nuclear power plant was exempt from the sanctions, the westerners prevented the supply of the equipment (needed by the power generation facility) to Iran.”

Iran signed a deal with the Germans to build the facility, but Berlin did not comply with the agreement following the victory of the Islamic Revolution in Iran in 1979. The Germans did not return the huge sums that they had received from the former Pahlavi regime for the construction of the power plant either.

Then the Islamic Republic signed the Bushehr contract with Russia in 1995 and the nuclear power plant reached its full capacity by August 2012. It is located about 18 kilometers South of the provincial capital.

The Bushehr nuclear power plant adds 1,000 megawatts of electricity to the national grid when operating at full capacity.