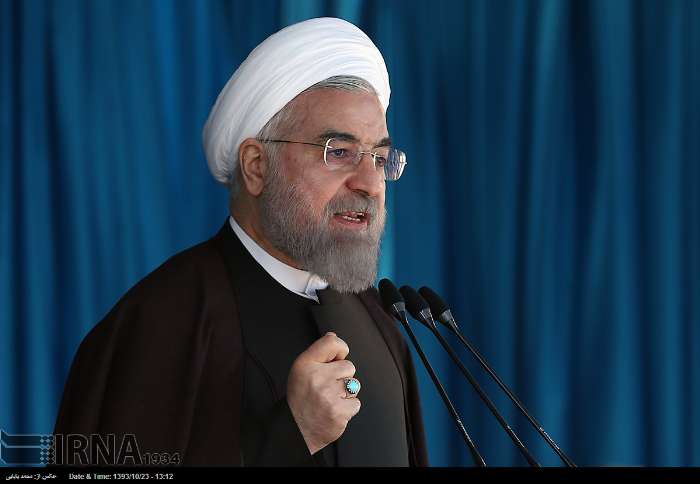 Bushehr, Jan 13, IRNA – President Hassan Rouhani on Tuesday said it would be against the interests of Western nuclear negotiators if they failed to pursue a reasonable and quick approach towards Iran.

The President made the remarks while addressing a large gathering at Bushehr’s sports stadium in this southern provincial capital city.

Commenting on the present situation of oil price in the world market, President Rouhani said, “Western countries think they have succeeded to create a new problem for Iran by reducing the price of oil but this will not put Iran under any pressure.”

‘Iran has predicted necessary ways to compensate the drop in oil price,’ said the President stressing, “The era of threats and sanctions is over.’

“Those who designed the oil drop plan to damage certain countries, have to know that they would regret that as they cannot continue this path.

If they think Iran will lose from the fall in oil price, they have to notice that other producing countries such as Saudi Arabia and Kuwait will also lose even more than Iran.

“Iran will continue moving on the path of constructive negotiations and interaction with the world and has taken first steps towards breaking Western sanctions through the support of people and guidelines of the Supreme Leader of the Islamic Revolution Ayatollah Ali Khamenei,’ the President noted.

He urged the Iranian nation to maintain its unity and solidarity, saying, ‘We are all from one single country, living under a single flag with a single Constituations and a single leadership. And we are all seeking a single objective which is national prosperity.’