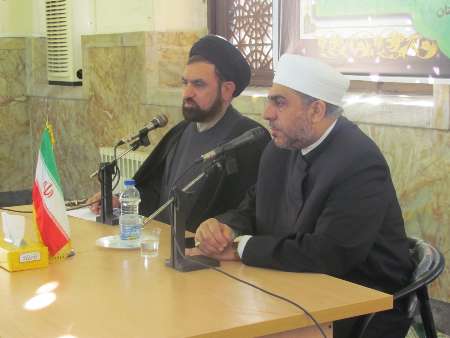 60-year long Palestinian resistance based on love of Prophet (PBUH)

Gorgan, Golestan Prov. Jan 12, IRNA – The Head of Iran-Palestine Friendship Group said here Monday love of Prophet Muhammad (PBUH) and his Infallible Household has been the major drive of the Palestinian nation in their 60-year resistance against occupation forces.

Sheikh Abdullah Muhammad Katamtu made the comment during a visit to Gorgan’s Imam Khomeini Seminary during which in an address to the seminary scholars and tutors he elaborated on the Palestinian nation’s love of the Prophet’s Household, the Iranian Leader and nation, and their hatred of ISIS and the crimes they have committed in Syria and Iraq.

Sheikh Katamtu who is meanwhile the imam of Al Wasim Mosque in Damascus stressed that the enemies of Islam have always been after destroying this last true religion by sowing the seeds of discord among Muslims.

‘Therefore, if we all rely on love of Prophet Muhammad (PBUH), our Holy Book, and countless other commonalties, the enemies will be disarmed and nothing will remain to divide Shia and Sunni Muslims,’ he said.

He also referred to the strong role Iran has played throughout the history of the Islamic Revolution in the campaign against the usurper Zionist regime, arguing that the Palestinians’ victories in the years 2012 and 2013 were both indebted to Tehran’s all out support.

The Palestinian official said that there are authentic documents proving that the Americans and some of their western allies established the ISIS with Saudis and some other regional reactionary political systems providing the financial support for them.

‘The Daesh is the advanced version of Al Qaeda and Al Nusra whose show off is more demonstrative then its predecessors, and they all function to serve the interests of the international Zionism and the United Sates,’ he added.

The seminary students at the end posed some questions and Sheikh Katamtou replied to them.