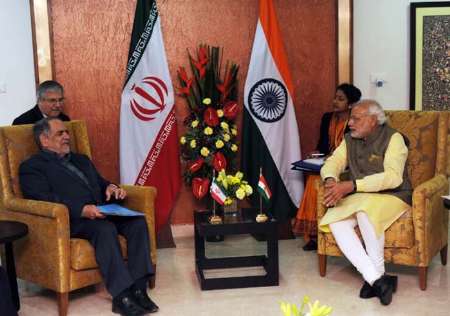 President Rouhani’s invitation was handed over to the Indian premier on Sunday by senior presidential adviser Akbar Torkan who is currently in India to attend the seventh Vibrant Gujarat business summit.

The Indian premier welcomed the invitation noting he would travel to Tehran at his earliest possible time.

The three-day Gujarat business summit is attended by UN Secretary-General Ban Ki-moon as well as ministers and corporate leaders from 100 countries.

In his meeting with the Indian prime minister, Torkan outlined Tehran’s views on huge potentials existing for promotion of Iran-India relations.

He said Iran can help energy hungry India meet its demands through a gas pipeline which would take Iran’s gas to the Gujarat port in India via the port of Chabahar in Iran’s Sistan and Baluchestan province (southeast of the country) and after passing through a 940-km-long sea route.

He referred to Iran’s Chabahar Free Trade Zone as a center of joint economic interests of Iran and India.

Modi stressed that Iran and India have stayed together in difficult times.