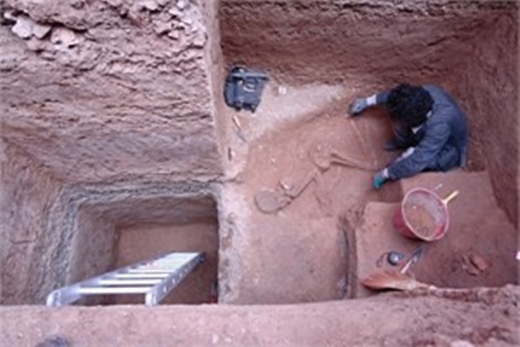 Residence in Tehran dates back to 7,000 years ago

After tests, the 7,000-year-old human skeleton is to be transferred to the National Museum of Iran to be put on display.

Archeological excavations in Molavi Street, south of Tehran, have produced a human skeleton that dates back to the 5th millennium B.C. What appears below is a partial translation of a report filed by the website of the Research Center of Iran’s Cultural Heritage, Handicrafts and Tourism Organization (www.richt.ir) on the finding:

“The remarkable find has pushed the history of residence in Tehran back to 7,000 years ago. Earlier, the oldest archeological finds in Tehran belonged to Gheytarieh Hills in the northeast and were 3,000 years old. The recent excavations carried out in an area between Mohammadieh and Ghiam squares have also produced a lot of underground items,” said Mohammad Esmail Esmaili Jolodar, who leads a team of archeologists tasked with carrying out excavations in and around the city’s Grand Bazaar.

He also added that after due measures to preserve the skeleton, it will be transferred to the National Museum of Iran to be put on public display.

Translated by IFP from RICHT