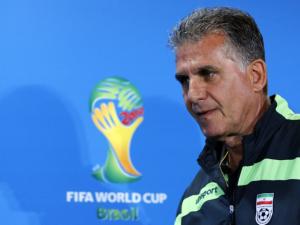 Iran started the 2015 AFC Asian Cup campaign with a 2-0 victory over Bahrain in Group C.

The former Real Madrid and Portugal coach, has seen his team play only two matches since last year’s World Cup — a 1-0 victory over South Korea in November in Tehran and a win last Sunday over Iraq by the same score in Sydney.

“We suffer a lot to prepare friendly games and to move internationally to prepare the team and players. After the World Cup the situation is getting worse and worse. The players are victimized by the limitations of the sanctions.”

Queiroz complained that the knock-on effects were hampering his plans, and accused FIFA of not releasing up to $8 million in appearance money owed from last year’s World Cup in Brazil.

“The situation is worse because the money is stuck,” said Queiroz, who took the Iran job in 2011. “It’s stuck in FIFA and stuck in the AFC (Asian Football Confederation).”

“When we come to a competition like this, we have 80 million people dreaming about the team’s expectations, 80 million people supporting the team,” said the 61-year-old. “But we can’t play because we don’t have the chance.

“Korea and Iraq did us a big favor, paying some of their expenses. When you come to this tournament (you see) it’s not about fair play. For those who always talk about fair play, there is no fair play.”

“Fair play is to give opportunities to these kids to play international matches, to learn as all players deserve. It’s part of the FIFA spirit that politics should not interfere with the game,” he said.

“In order to change and really prepare the future of the Iranian national team, it’s time we got the all-clear from directors and the people that can help,” he added. “Iran cannot progress and it’s not fair for sport people, football players.”

“Without support they cannot progress,” he shrugged. “At the end of the day when you don’t have resources to play games, it’s not fair for football, not fair for the young players of Iran.”