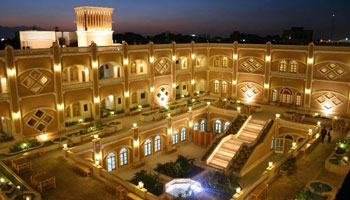 He said in case the four hundred hotels are built by the next eleven years, Iran can well meet needs of twenty million tourists.

“Most foreign investors are willing to construct multi-star hotels in Iran and came to understand that Iran is a good market for investment,” Soltani-Far said, adding their presence in Iran is intertwined with the results of nuclear talks.

The Iranian tourism official said European investors have expressed willingness to build hotels in Iran, but would announce their final decision after the talks and ease of sanctions on Iran.

The hotel chains group includes 500 companies and owns 7800 hotels in 72 countries across the world whose center is located in the US Maryland. The first Marriott Hotel was established in 1972 by Alice Marriott. Its earnings in 2012 hit $12 billion.

“With the change of approaches in foreign policy in current time, foreign investors are willing to join Iranian tourism market. Even in one of the international meetings, Marriott Hotel Chains group, a famous brand in hotel management, had expressed willingness to build hotel chains in Iran,” Salimi said.