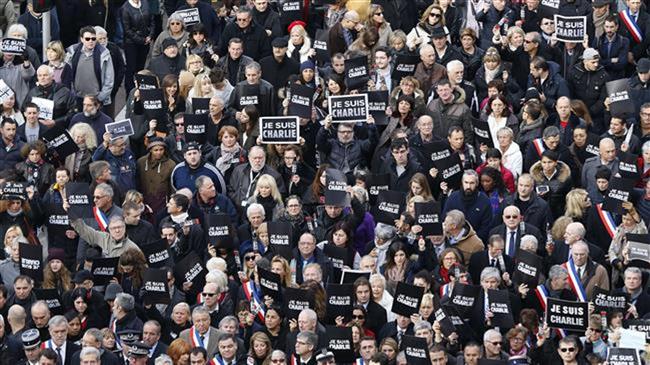 People march during a rally in the French city of Nice to protest terrorism, January 10, 2015. (AFP photo)

Leaders from the four corners of the world are set to join a mass demonstration in France in solidarity with the victims of the recent attacks in the country.

Paris is to see a major march on Sunday with the aim of paying tribute to the 17 people killed in three days of terrorist attacks in the capital.

President Francois Hollande and his predecessor, Nicolas Sarkozy, are among those politicians to participate in the event.

More than 5,500 police forces and military personnel have been deployed in the capital. Approximately one million people are expected to attend the march.

France’s Interior Ministry has also said exceptional measures will be taken to ensure the safety of the march.

The rally has been planned to take place near the office of satirical newspaper Charlie Hebdo, where two gunmen killed 12 people on January 7.

On January 9, two brothers, Said and Cherif Kouachi, suspected of slaughtering the people two days earlier at the Paris office of Charlie Hebdo, were killed after being cornered at a printing workshop with a hostage in the town of Dammartin-en-Goele, northeast of Paris.

On the same day, police ended a second hostage-taking at a supermarket in the eastern Porte de Vincennes area of Paris, killing one armed hostage-taker, Amedy Coulibaly, who was also a suspect in killing a policewoman in southern Paris a day earlier.

Officials say four hostages were also killed before the raid was carried out.