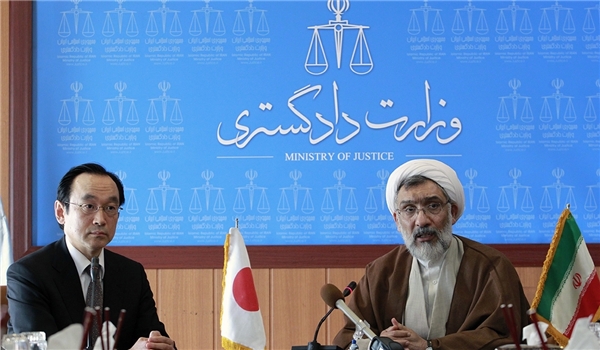 TEHRAN (FNA)- Japanese Ambassador to Tehran Koji Haneda in a meeting with Iranian Justice Minister Mostafa Pourmohammadi expressed the hope that nuclear talks between Tehran and the world powers would end in fruitful results.

“We hope that the negotiations that Iran has seriously started with the Group 5+1 (the US, Russia, China, Britain and France plus Germany) will yield peaceful results and private Japanese companies won’t have any restriction for operation (in Iran),” Haneda said in Tehran on Sunday.

The next round of the nuclear talks between the two sides will be held at the level of deputy foreign ministers in Geneva, Switzerland, on January 18.

Elsewhere, the Japanese diplomat underlined his country’s enthusiasm for the further development of relations and cooperation with Iran in different fields, and said the two countries have signed an agreement on extradition of criminals which can further expand bilateral judicial ties.

In July, Iranian and Japanese officials, in a meeting in Tehran, underlined the need for the expansion of cultural relations between the two countries.

During the meeting in the Iranian capital, Chairman of the Iranian Parliament’s Social Commission Abdolreza Azizi and Haneda discussed bilateral ties.

During the meeting, Azizi pointed to the age-old relations between Iran and Japan, and said, “Iran and Japan as important Asian countries have many commonalities and potentials for developing their relations.”

The Japanese ambassador, for his part, pointed to favorable Iran-Japan relations, and expressed the hope that the two countries would further broaden their bilateral relations.