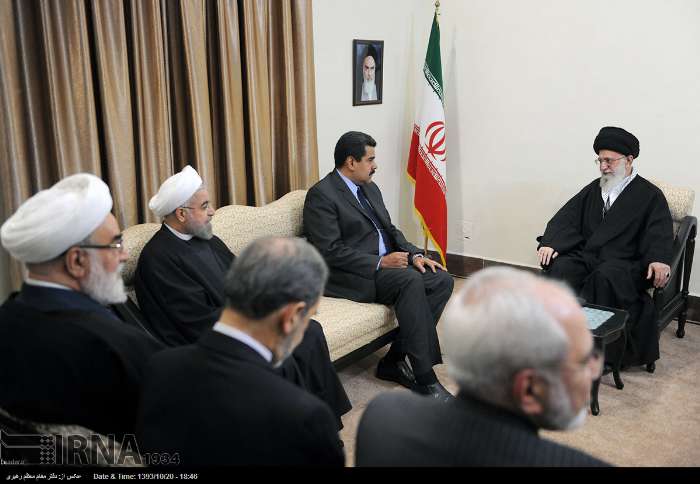 The Supreme Leader has renewed the Iranian regime’s allegation — and betrayed its economic concern — that other countries are using falling oil prices as a political weapon against the Islamic Republic.

Hosting Venezuela’s President Nicolas Maduro on Saturday, Ayatollah Khamenei said the price decline — more than 50% since June — is “politically motivated” and “is not economic.”

“Our common enemies are using oil as political tool and definitely play a role in this sharp fall in oil prices,” he claimed.

Both Venezuela and Iran, two of the largest oil producers in the world, are in the midst of serious economic problems from falling production, rising unemployment, and pressure on their currencies. The Islamic Republic is also contending with US-led sanctions which have restricted its oil exports by more than 40% since 2012.

The exports are the main source of income for the Iranian regime and the Government budget, which has been revised from a baseline of $100/barrel to $72/barrel for 2015-2016 — still far above the current oil price of about $55/barrel.

The Supreme Leader, promoting solidarity with Venezuela, praised the efforts of Caracas against Israel and “described such efforts as the reason for the hegemonic powers’ hostility toward the Latin American country”

The head of Iran’s Atomic Energy Organization, Ali Akbar Salehi, has blamed Israel for failure to reach a comprehensive nuclear agreement last November with the 5+1 Powers (US, Britain, France, Germany, China, and Russia).

Appearing on the main State TV channel, Salehi said the two sides were close to agreement when the 5+1 suddenly pulled back. “A few days after that, the Prime Minister of Zionist regime Benjamin Netanyahu declared that he had been behind the failure in reaching an agreement by [the deadline of] November 24, and [Secretary of State] John Kerry also stated the US was in complete coordination with Israel,” he said.

Salehi claimed that, while the other party “found the continuation of crisis to the best of their interests”, Iran had shown flexibility while maintaining its national interests and nuclear program.

Iran and the 5+1 Powers will resume talks this week at the level of political deputies, preceded by a conversation between Iranian Foreign Minister Mohammad Javad Zarif and US Secretary of State Kerry.

Salehi, a former Foreign Minister, referred to the main issue in dispute, the number and level of Iran’s centrifuges for uranium enrichment: “Currently, the discussions are on the issue of enrichment and the annual uranium production.”

He restated the Supreme Leader’s call for a capacity of 190,000 “Separative Work Units” by 2021 — about 20 times the current output, and in contrast to the US demand for a reduction: “Our enrichment capacity must be 190,000 SWUs, and that amount would supply the 30 tons of enriched uranium for the Bushehr power plant.”