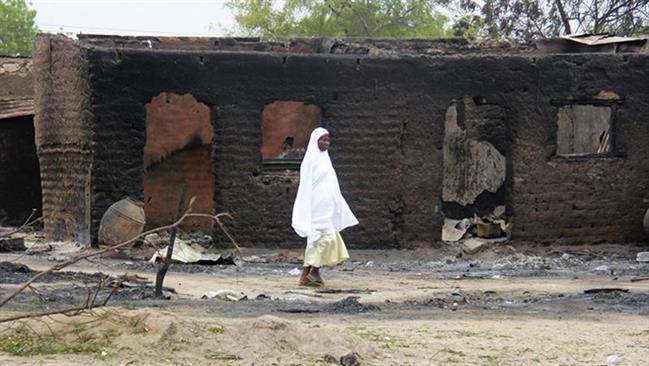 Up to 2,000 killed in Nigeria’s Baga: Amnesty International

A woman walks past burned houses in the remote town of Baga, northeastern Nigeria, on April 21, 2013.

Boko Haram Takfiri militants have killed as many as 2,000 people in their attack on Nigeria’s northeastern state of Borno, Amnesty International says.

On Friday, the London-based rights group referred to the militant’s attack on the Nigerian town Baga as the “deadliest massacre” in Boko Haram’s history.

Hundreds of militants attacked the town, which is located close to Nigeria’s border with Chad, on Wednesday after capturing a key military base in the town on January 3.

Gava added civilian fighters have given up trying to count all the bodies.  He added, “No one could attend to the corpses and even the seriously injured ones who may have died by now.”

A local official said that the victims were mostly children, women, and elderly people who were not able outrun the terrorists as they entered the city.

Also on Friday, the United Nation High Commissioner for Refugees (UNHCR) said over 7,300 Nigerians have left their homeland for neighboring Chad in an attempt to flee the deadly attacks by the Takfiri terrorist group.

Boko Haram, whose name means “Western education is forbidden,” says its goal is to overthrow the Nigerian government.

The terrorist group has claimed responsibility for a number of deadly shooting attacks and bombings in various parts of Nigeria since the beginning of its operations in 2009, which have claimed lives of thousands of people.

According to the Washington-based Council on Foreign Relations, the violence, which has forced 1.5 million people to flee their homes, killed over 10,000 people last year alone.