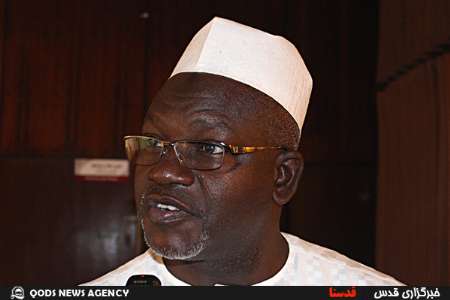 Tehran, Jan 10, IRNA — A Nigerian scholar says an international conference in Tehran on Muslim unity that wrapped up work on Friday clearly showed that the Muslim community needed to get united in materializing the Palestinian cause.

Ibrahim Abdollahi was speaking to Qods News Agency on the sidelines of the conference.

The Nigerian Alim said the Palestinian issue has remained unresolved because the west is concerned about its interests in the issue. ‘The Palestinian problems would remain unresolved unless the Muslim states come together and form a single union,’ Abdollahi said.

The Nigerian scholar appreciated the Islamic Republic for its clear-cut and sustainable support for the Palestinian people, adding that the regional leaders would rather follow Iran’s example concerning the Palestinian issue.

In another regard, Abdollahi said the Zionist regime suffers isolation however it would recover if the Muslim states fail to use the opportunity of the back-to-back crises facing the regime at the moment.