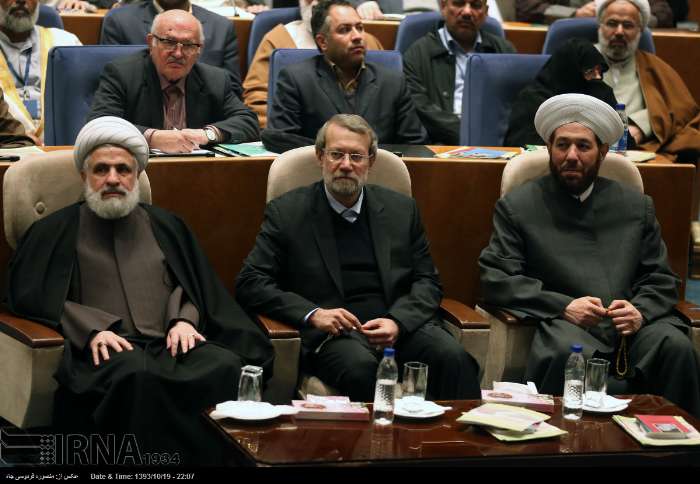 Tehran, Jan 10, IRNA – Parliament Speaker Ali Larijani said what is happening in France now is the result of west’s behavior in Syria.

He made the remarks in his speech to the closing ceremony of the 28th International Islamic Unity Conference in Tehran on Friday.

He said the incidents in France in the past few days – which he described as an absolutely insane act of terrorism – are the outcome of what west did in Syria.

Pointing out that west is now seeking to offer even more insults to the Holy Islam instead of apologizing for its behaviors, he said what two terrorists did has nothing to do with Islam.

Thus, he added, west had no right to offend the Holy Islam.

The speaker said that west is behaving vindictively instead of trying to correct its mistake, thus wasting the chance to solve problems.

Stressing that Muslims were now determined to decide for their own destiny, he said France incidents were a proof to the fact that it was wrong for the west to support terrorists in Syria and provide arms for terrorists.

He said terrorists got their arms from west or their puppets in the region so it is for west now to answer why it supported terrorists.

He stated that Tehran was against terrorist groups from the very beginning and they at times even clashed with Iran.

The parliament speaker further referred to disparity and lack of convergence on the part of the governments as one major problem for the Islamic world.

He said some countries are now talking of opposing Iran’s policies but the question is whether hostility to Iran should be given top priority at the present juncture where the west is pressing these very same countries.

He said that unfortunately these countries are even unable to analyze their own situation and use their own resources in a proper way are selling off their oil for nothing just for the western countries to accumulate their own benefits.

They think that by doing so they are going to press Iran over its nuclear talks with the west but they are mistaken as Iran has endured conditions much worse than the present ones, Larijani added.

Noting that presently Iran’s non-oil export stands at 50 billion dollars per year, he said situation has drastically changed in Iran so it is unbecoming of Islamic states to behave maliciously towards another Muslim country.

Praising the fact that the process of democratization has gained a new momentum in Islamic countries, he referred to extremism and radicalism as the major threats for the Muslim world and regretted that enemies are misusing this as an instrument.

The international conference kicked off in Tehran on Wednesday with the participation of hundreds of Sunni and Shia scholars and intellectuals from more than 60 countries.

The participants discussed ways to promote unity and solidarity in the Muslim world and focused on problems facing the Islamic world, such as the threat posed by the Takfiri militants.