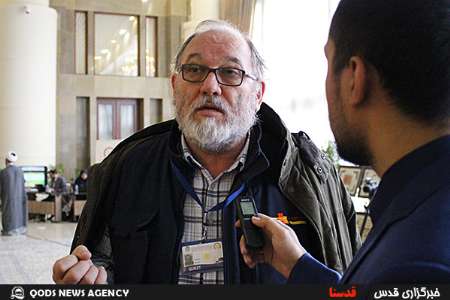 Tehran, Jan 10, IRNA — A Slovenian university professor says the world people have a general responsibility to support the Palestinian issue irrespective of their religious or intellectual affiliations.

Professor of the Ljubljana University, Drago Esfirt was speaking to Qods News Agency on the sidelines of an international conference in Tehran on Muslim unity.

The Slovenian figure however believed that the UN may be a favorable body for materializing the Palestinian rights, urging Muslims to refer to the international body.

The university professor appreciated Iran for its appropriate treatment of religious minorities and said the Islamic Republic is capable of finding solutions for all regional problems, including the Palestinian issue.

Asked about the US pro-Israeli policies, the professor said the US and other big powers have always sought to use international regulations in favor of Israel.

“Palestine must turn into a powerful country because the weaker a country is the more it would fall victim to illegal conducts,” he said.

28th International Conference on Islamic Unity started in Tehran on Wednesday under the banner of ‘single Muslim community, challenges and solutions.’ It wrapped up Friday.