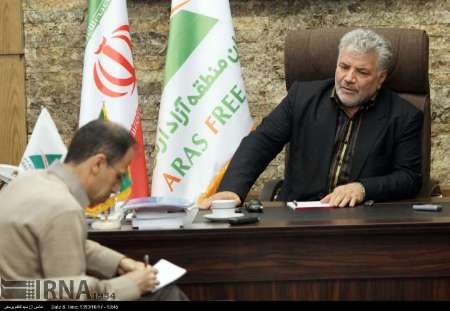 Speaking to IRNA, the official further remarked that one of the aims of setting up free zones is attracting foreign investment, adding that through consultations with Iranian embassies in other countries and by participating in foreign exhibitions efforts are being made to further present Aras Free Zone and its economic capacities at international level.

Stressing that the main strategy of the zone is industrial development, he said however steps have been taken in other economic sectors such as agriculture with regard to the capacity of the zone.

He pointed to the fact that most parts of the investment being made in agriculture sector are domestic capital and announced that 137 hectares of agricultural lands has been transferred to the investors.

The official noted that Aras Free Zone along with agricultural products is supporting investors for the establishment of processing industries in this sector, adding that the National Development Fund puts facilities at the disposal of investors in agriculture sector.

He referred to the plan for the development of Aras Free Zone in line with the targets for the formation of the zone and said the approach of the zone is development of modern hi-tech industries and export-oriented products in an effort to increase non-oil exports.

Khadem Arab Baghi said major imports to Aras Free Zone were raw and intermediate commodities and noted that import of consumer products to the zone has reduced considerably due to increase in customs tariffs and trade benefits.

He pointed to the permission for the construction of an airport in the zone with the required budget of three billion rials and said private sector investors are welcomed for the establishment of the airport.

He said efforts are underway for improving tourism services in the zone, adding that for this purpose historical monuments there will be reconstructed under the supervision of the Cultural Heritage Organization.

He referred to the establishment of day clinic for the support of incoming patients from the neighboring countries and university campuses in Aras Free Zone for upgrading scientific and technical knowledge of the region as other activities planned for implementation in the zone.

The zone is situated in the neighborhood of the Nakhichevan autonomous region and Armenia, 137 km from the city of Tabriz.

The city of Jolfa as the center of this industrial-trade zone has a record of a hundred years in the field of trade and customs activities and is the joint border between Iran and Nakhichevan and is the busiest passenger border in Iran after Tehran airports.