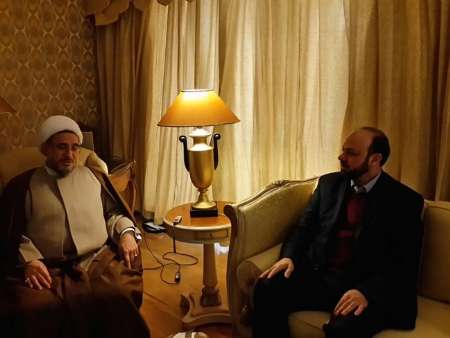 Tehran, Jan 9, IRNA — Secretary General of the World Forum on Proximity among Islamic Sects, said the Palestinian resistance, Hamas, and Hezbollah can unite the Islamic Nation on the basis of supporting occupied Jerusalem and the Aqsa Mosque.

A Hamas delegation attending the International Islamic Unity Conference in Tehran heard this statement during a meeting with Araki on Thursday.

Both parties discussed the strategies and procedures of activating the roles of Islamic scholars and intellectuals to bear their responsibilities toward the Palestinian question, the reporter added.

The two parties stressed that Islamic unity is very significant to the Islamic nation in order to face challenges and threats at all levels in all Islamic countries.

Ayatollah Araki called on all Muslims; Sunnis or Shias, scholars or parties to ramp up efforts to support the Palestinian people and its resistance.

For his part, head of Hamas delegation Jamal Issa said the Israeli occupation has intensified its aggressive policies against the Palestinian people, taking advantage of the regional crises Islamic countries are going through.

He called on Muslims to stand by the side of the Palestinian people, and stressed on the need to protect the Aqsa Mosque and other Palestinian sacred places in face of growing Judaization campaigns.

The International Islamic conference is held under the theme “Unity of the Muslim Ummah, Challenges and Solutions”.