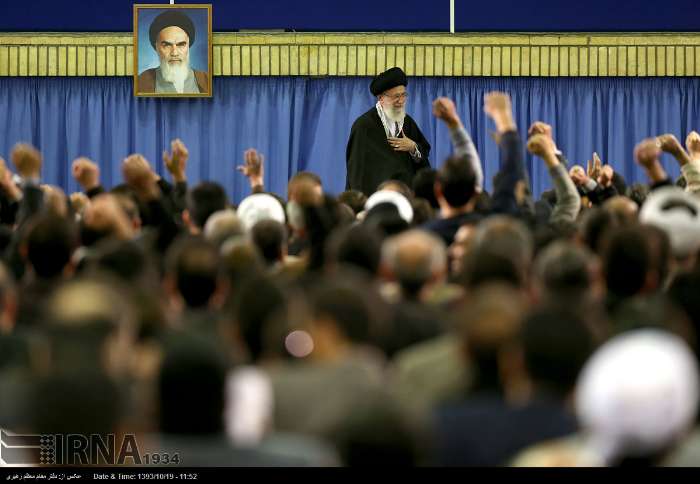 Tehran, Jan 9, IRNA – Supreme Leader of the Islamic Revolution Ayatollah Seyyed Ali Khamenei said unity is the great lesson that Muslims should learn from the Holy Prohet of Islam (PBUH), adding that realization of his divine message must be the top priority of Muslims.

The Leader was addressing a group of people, military and civil officials, ambassadors of Islamic countries and participants of 28th Islamic Unity Confence held in Teharn who were visiting him on the occasion of the auspicious birth anniversary of the Holy Prophet on Friday.

The Supreme Leader expressed his deep regret over the victory of the enemies’ plots to create disunity among Muslims and said Muslims have huge potentials and unique features and if they are united over their main ideas, then the progress of the Islamic world is guaranteed and the result of this unity is ‘dignity and grandiose ‘ for the Prophet of Islam.

The leader said neither the Shia Muslims allied with the British MI6 are Shias, nor the Sunni mercenaries of the American CIA are Sunnis, as they are both anti-Islamic agents.

The hands involved in sowing the seeds of discord among the Shia and Sunni Muslims are tied with the intelligence services of the enemies of Islam, said the leader.

‘Neither the Shia Muslims allied with the British MI6 are Shias, nor the Sunni mercenaries of the American CIA are Sunnis, as they are both anti-Islamic agents, said Ayatollah Khamenei.

Some regional countries have based their foreign policies on observing enmity against Iran, but that is a big mistake and contradictory to the rule of sound mind and rationalism, but establishment of friendly ties with Muslim and neighboring countries is the basis for the Iranian foreign policy, said the Ayatollah.

The Leader of the Islamic Revolution added that only being side by side each other of the Muslim nations is enough to give the Islamic world and the Muslim Ummah a respectable personality, giving example of the millions’ strong march in this year’s anniversary of 40th day after martyrdom of Imam Hussain (Arbaeen) which ‘turned into a grand movement and gained great international coverage.’

The Leader further focusing on the Arbaeen march of this year, said that it was an amazing event that the enemies of Islam and the Infallible Household of the Prophet had assumed had been blocked for good.

Ayatollah Khamenei meanwhile appreciated the Iraqi government, nation, and tribes for their selfless services offered to the Arbaeen mourners this year.

The Supreme Ledaer also rejected the promotion of ‘pluralism’ as a misunderstanding of the Quran and other Islamic texts, adding that according to verses of the Holy Quran, Islam is against pluralism.