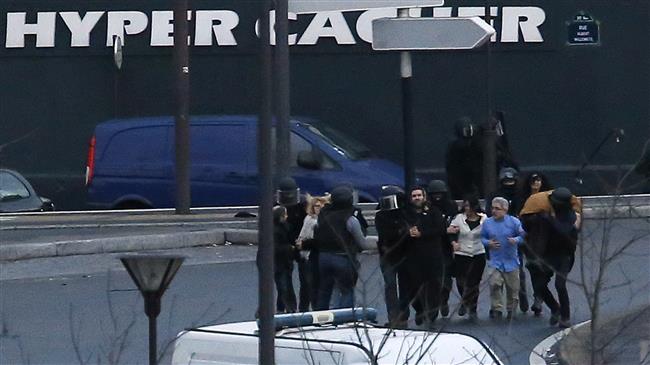 Members of the French police special forces evacuate hostages after launching an assault at a kosher grocery store in Porte de Vincennes, northeast of Paris, on January 9, 2015. (AFP photo)

Two separate hostage dramas have ended in France after three hostage-takers along with four hostages were killed in a town northeast of Paris and in an eastern area of the French capital.

Two brothers, Said and Cherif Kouachi, suspected of slaughtering 12 people at the office of Charlie Hebdo satirical French weekly in Paris, had been cornered at a printing workshop with a hostage in the town of Dammartin-en-Goele, northeast of Paris, since early hours on Friday.

They were killed in an assault by the French Special Forces, who also released the hostage.

Some accounts said the two suspects were killed after they came out firing at security forces.

Meanwhile, in the east of Paris, where a second hostage-taking event was underway throughout Friday, gunfire erupted after the police stormed a Jewish supermarket. At least one armed assailant is confirmed dead. He was killed after sounds of gunfire were heard at the grocery store in the eastern Porte de Vincennes area of Paris. Several hostages also ran to safety.

Another assailant is believed to have fled the scene.

Masked gunmen stormed the Paris headquarters of the satirical weekly, Charlie Hebdo, on Wednesday, gunning down a dozen people, including eight journalists, two police officers, a maintenance worker and a visitor.

A policewoman also succumbed to injuries she sustained in a separate shooting in southern Paris on Thursday.

On Friday, a shootout followed by a hostage-taking at a kosher grocery shop northeast of Paris, left at least two people dead.

The ISIL Takfiri group has claimed responsibility for the terrorist attack in Paris and threatened to target the United States and Britain next.