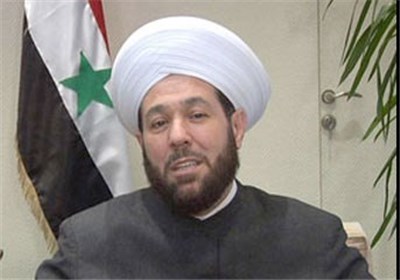 TEHRAN (Tasnim) – The Grand Mufti of Syria emphasized the need for efforts to promote unity among Muslims, saying that the Islamic Ummah (community) needs a single spiritual leader to resist against enemies.

“Imamate (leadership) is a spiritual position and due to the existence of an Imam (leader), Iran was able to achieve victory in its (Islamic) Revolution,” Ahmad Badreddin Hassoun said, referring to the leadership of Imam Khomeini in Iran’s 1979 Islamic Revolution that ousted the West-backed Shah.

He added that Muslim nations are now in need of a single spiritual leadership to remove differences.

He made the remarks during the opening session of the 28th International Islamic Unity Conference in Tehran on Wednesday.

Elsewhere, the Sunni cleric described plots to sow discord among Muslims as one of the main strategies pursued by enemies of Islam, and said, “We should always try our hardest to take steps in the path of unity and resistance and follow our prophet (Prophet Muhammad (PBUH)) as a role model.”

Titled “Unified Islamic Ummah: Challenges and Strategies”, the international conference has brought together some 1,200 Islamic scholars and intellectuals from around the globe.

Attendees at the event include educated Muslim figures, ministers of Islamic countries, clerics, scholars and representatives of scientific and cultural circles from Iran and across the world.

The main purpose of the conference is to discuss ways to promote unity and solidarity in the Islamic world and bring closer views of Muslim clerics and scholars’ on diverse religious issues.