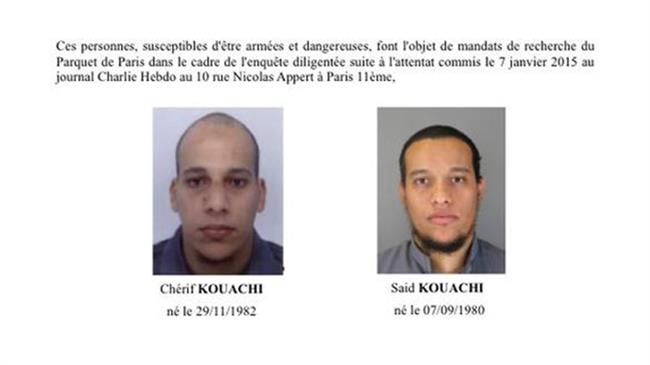 One of 3 Paris gunman surrenders after attack on Charlie Hebdo

The youngest of the three gunmen engaged in an attack on satirical weekly Charlie Hebdo in Paris has surrendered to police, a report says.

“Hamyd Mourad handed himself in to police… on Wednesday at 11:00 pm (2200 GMT) after seeing his name circulating on social media,” AFP quoted a source close to the case as saying.

“He has been arrested and taken into custody,” another source confirmed.

French police identified the two brothers suspected of carrying out the terrorist attack, along with Mourad, as Said and Cherif Kouachi, both in their early 30s.

Police also issued a wanted poster with images of the suspects, saying they are “on the loose, armed and dangerous.”

Reports said that a manhunt was underway for the two suspects.

Earlier, another report by NBC News quoted US counterterrorism officials as saying that one of the suspects had been killed and two others taken into custody.