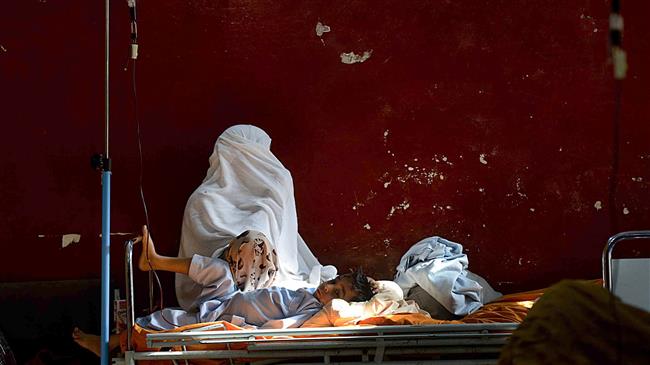 A Pakistani mother sits next to her HIV+ son, receiving blood at a medical center in Peshawar.

Scientists have taken crucial steps in their quest for finding a remedy for HIV by finding clues about how the virus manages to evade detection after being suppressed by drugs.

Researchers at Johns Hopkins University School of Medicine in Baltimore, Maryland, made the announcement on Wednesday after they analyzed blood samples from 25 patients with the human immunodeficiency virus, AFP reported.

After being treated by antiretroviral drugs, the sleeping virus harbors mutations that help it skirt detection by the immune system.

Now, scientists have voiced hope that the immune system can be trained to spot the peril and destroy it.

After the infection is rolled back, HIV hides in a component of the immune system, called memory CD4 T cells, lurking there to rebound once the therapy is stopped.

The research, originally published in the Nature journal, touches upon the “kick-and-kill” strategy.

“Our results suggest that luring HIV out of hiding is winning only half the battle,” said Robert Siliciano, a professor of molecular biology at the university, adding, “We found that these pools of dormant virus carry mutations that render HIV invisible to the very immune cells capable of disarming it, so even when the virus comes out of hiding, it continues to evade immune detection.”

Out of the 25 HIV+ patients the researchers studied at the university, 10 had undergone early therapy and 15 had started the drugs only after the virus entered a chronic stage.

Almost no mutations were detected in the virus inside the bodies of early initiators of the therapy, while the others had HIV stuffed with “escape mutations.”

Still, the virus had retained a tiny bit of its original viral protein, left non-mutated, in the bodies of the late initiators of the therapy.

Scientists exposed uninfected immune cells to the virus of both kinds and managed to kill 23 percent of the cells with escape mutations and 61 percent of the ones in the early initiators.

“It’s as if the immune system had lost its ability to spot and destroy the virus, but priming killer T cells that recognize a different, non-mutated portion of HIV’s protein reawakened that natural killer instinct,” Siliciano said.