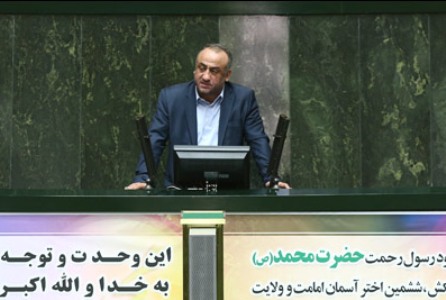 Speaking in a Majlis session, Shojaei Kiasari said: ‘We hope that one day the country’s budget bill will be completely based on non-oil revenues and that economic prosperity will be sought in agricultural, industrial and tourism products, and scientific development as well.’

Pointing to ‘Unity Week’ celebrations underway across the Muslim world to mark the birth anniversary of Prophet Muhammad (Peace Be Upon Him), Shojaei Kiasari called for practical measures to boost Islamic unity among the Shia and Sunni Muslims.

He touched upon nuclear the talks between Iran and the six governments – widely known as the P5+1 – and said that Iran has made major achievements in the light of the resistance of Iranian nation and wise leadership of Ayatollah Ali Khamenei.

The Supreme Leader assigned the government to adopt resistance economy and said on Wednesday that the government is expected to take effective steps to immunize the national economy from the sanctions the western governments have imposed on Iran for the nuclear dispute.

The Supreme Leader said that the nuclear dispute is a political ploy to justify the sanctions.