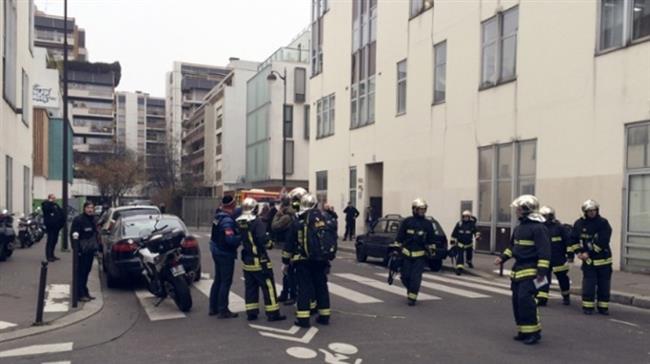 Police and firefighters stand outside Charlie Hebdo offices in Paris, France, on January 7, 2015.

At least twelve people have been killed and five others critically injured when several masked men armed with automatic weapons stormed the offices of French satirical newspaper Charlie Hebdo in the heart of the French capital, Paris.

“They opened fire on everyone, it was butchery, a real slaughter,” Conteno said.

“Some of the people there took refuge up on the roof. The attackers then emerged, and there was a shootout with police. One policeman has been seriously wounded, he may die. Two others are also wounded. The attackers then fled in the direction of the Porte de Pantin [on the outskirts of Paris],” He added.

Luc Poignant, an official of the SBP police union, said the attackers escaped in two vehicles.

French President Francois Hollande later headed to the scene. He said security level had been increased in Paris and a number of terrorist plots had been foiled in recent weeks.

Hollande said France had experienced “an exceptional act of barbarism committed against a newspaper.”

France was facing a “shock,” he added. “We need to show we are a united country,” he said.

“France has to be firm and strong. We will fight these threats and we will punish the attackers,” the French president pointed out.

An emergency meeting with top government officials in attendance will be held at the Elysees Palace within the next hour.

Charlie Hebdo has a long record of taking its satire seriously. The weekly magazine’s offices were firebombed in 2011 after the publication of insulting cartoons of the Prophet Mohammed.