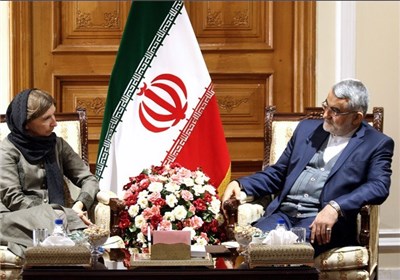 “Given Iran’s unique position in the region and its great influence on the regional equations, the Norwegian parliament and government welcome enhancement of cooperation with the Islamic Republic of Iran,” Norheim said on Wednesday.

She made the comments in a meeting with Chairman of the Iranian Parliament’s National Security and Foreign Policy Commission Alaeddin Boroujerdi, held in Tehran.

For his part, the top Iranian lawmaker said Tehran welcomes cooperation with any country that is genuinely concerned about the threat of terrorism.

Boroujerdi also blamed the unrest and security crises across the Middle East region on the mistake of arming and supporting the terrorist group made by the US and its allies.

Earlier in the day, Iran’s President Hassan Rouhani gave an assurance that the Islamic Republic, as an “Islamic world’s big regional power”, will support any Muslim nation or entity in the fight against violence, extremism and terrorism.

“The Islamic Republic of Iran will stand beside and defend the Muslims who fight for the sake of freedom of their land against usurpers,” President Rouhani said, addressing the opening session of the 28th International Islamic Unity Conference in Tehran.