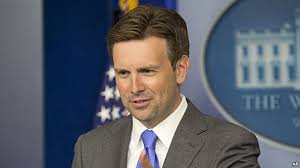 White House spokesman announced that additional anti-Russian sanctions may be imposed by Washington if Moscow fails to live up to the Minsk agreements.

“The longer the Russians refuse to abide by the commitments that they have already made, the more risk they face from additional sanctions,” Earnest told reporters Tuesday.

However, the spokesman noted that he does not know of “any impending plan to add to that sanctions regime right now.”

“Certainly the risk only increases as long as Russia continues to essentially ignore the important commitments that they made to try to de-escalate the situation in eastern Ukraine,” he continued.The White House spokesman described current US-Russia relations as “complicated” ones, but stressed that there is constructive cooperation between the countries in the space program and P5+1 talks with Iran.

“We are going to continue to make sure that we are making clear the concerns that we have with some aspects of Russia’s behaviour, while also trying to work with them constructively to advance our national security interests,” Earnest concluded.

Relations between Russia and the United States have deteriorated following Crimea’s reunification with Russia in March 2014 and the escalation of an armed conflict in Ukraine’s south-east, where Kiev-led forces have been carrying out a military operation against local independence supporters since April.

The United States and a number of its allies have introduced several rounds of sanctions against Russia over its alleged involvement in the Ukrainian crisis. The restrictive measures target Russia’s defence, banking and energy sectors, as well as a number of individuals.

Kiev and eastern Ukrainian militia agreed on a ceasefire deal during talks in Minsk in September, brokered by Russia and the OSCE, but have subsequently accused each other of violating the agreement.