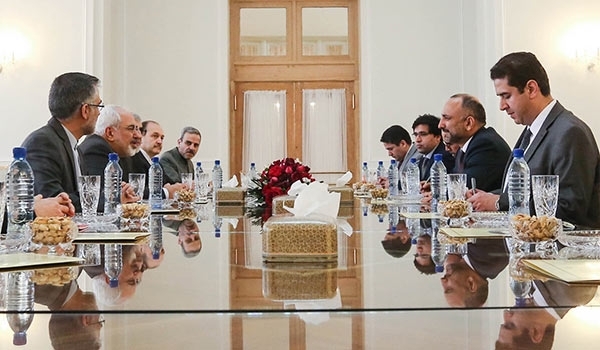 “The national unity government in Afghanistan prioritizes deepening of relations with Iran at all bilateral and multilateral levels …,” Hanif Atmar said during the meeting.

The Afghan national security advisor appreciated Iran for its supports during the difficult times for Afghanistan, and said, “We well never forget the kindness of the Islamic Republic of Iran.”

Hanif Atmar invited the Iranian foreign minister to visit Afghanistan, and said that high-ranking Afghan officials are willing to visit Iran in the near future.

The Iranian foreign minister, for his part, pointed to the recent presidential election in Afghanistan, and expressed pleasure that “the voting resulted in the formation of a national unity government” in that country.

He noted that the Iranian foreign ministry is ready to broaden cooperation with Afghanistan with the aim of consolidating stability and security in Afghanistan.