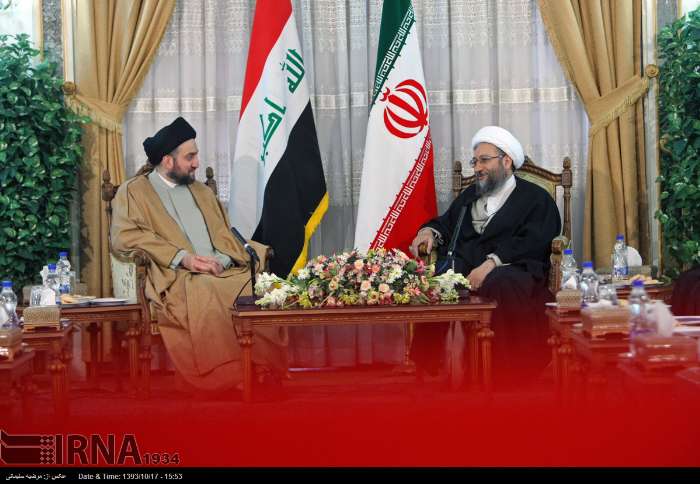 Tehran, Jan 7, IRNA – Judiciary chief said on Wednesday that cooperation between Iran and Iraq will strengthen Islamic world and security, stability of the region.

According to the Judiciary public relations department, Ayatollah Sadeq Amoli Larijani in a meeting with head of Islamic Supreme Council of Iraq Ammar al-Hakim said that cohesion and national unity of Iraqi government and people and different political groups were an important factor for restoring tranquility, security and stability to Iraqi society.

He said that created unity and cohesion in Iraq against Takfiri group of Daesh was a successful experience for future of Iraq.

He underlined that cooperation between Iran and Iraq is an important necessity in strengthening might and cohesion of the Islamic world.

Considering huge capacities of Iraq seminaries expansion of cultural relations between the two countries is necessary, the ayatollah continued.

Head of Islamic Supreme Council of Iraq by presenting a report on current situation and the latest developments in Iraq said that by efforts and aspirations of Iraqi government and nation and the support of the religious leaders the recent plots of enemies against Iraq was neutralized.

Ammar al-Hakim praised Iran supportive role in fight against Daesh and said that enemies of Iraq have formed many plots to destroy unity and tranquility in the country, but by people awareness and efforts, unity and convergence the conspiracies doomed.